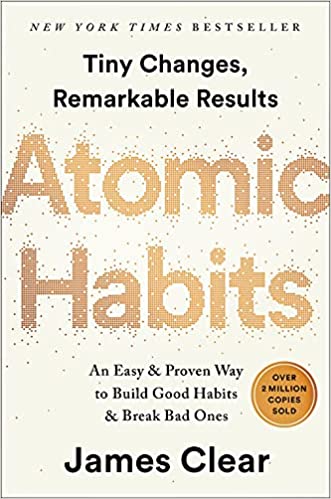 
The book Atomic habits by James Clear gives clear-cut instructions on building and breaking habits according to your personal goals.

The book, Atomic habits by James Clear (who is the creator of The Habits Academy, the premier training platform for organizations and individuals that are interested in building habits in life and work) is a self-help book that will give you a step-by-step guide on how to build good habits and also break bad ones.

Every action you take is a vote for the type of person you wish to become.


Be the designer of your world and not merely the consumer of it.


Summary of the book Atomic Habits

The book started with a short definition of what atomic and habit means. While atomic is an extremely small amount of a thing; the single irreducible unit of a larger system or the source of immense energy or power, a habit is a routine or practice preformed regularly; an automatic response to a specific situation.

Before the author divided the book into six parts, he narrated his story of a baseball accident he had on the final day of his sophomore year in high school. He was hit in the face with a baseball bat that crushed his nose into a distorted U-shape. He recovered after spending some weeks in the hospital. After his recovery, he felt his life had paused. He struggled with double vision for several weeks, and it took him months before his eyeballs returned to their usual location. His bad eyesight also affected his ability to drive, and he spent about eight months before he could drive again. All these compounded to getting him depressed.

All he wanted after his recovery was to get back on the field and play professionally since baseball had always been a significant part of his life. His return to baseball was not as smooth as he expected it to be; he had to start all over again, but he didn't give up. Despite his lackluster high school career, he still believed that he could become an excellent baseball player, and only he could make that happen.

The author's turning point occurred two years after his injury when he began college at Denison University–that was where he first discovered the surprising power of tiny habits. He gradually started building good sleep habits by going to bed early every night and keeping his room clean regardless of his busy schedule. All those minor improvements accumulated to giving him a sense of control over his life, and that was how he regained his confidence. All these habits paid off before he graduated because he was awarded the University's highest academic honor, the President's medal. So, the author believes that if he could achieve great things by simply changing his habits, he can also help you do more.

The book is divided into six sections: The fundamentals, the first law, second law, third law, the fourth law, and the advanced.

The fundamentals have three chapters in it. Here, the author vividly explained why tiny changes make a big difference. Chapter one emphasized the need for readers to not just focus on setting goals but also focus on designing systems because they do not rise to the level of their goals but fall to the level of their systems. It also explains how habits are the compound interest of self-improvement and how just one percent of improvement each day counts in the long run. This chapter also explains why one needs to be patient when trying to build good habits or break free from bad habits.

The next chapter explains the three levels of change: outcome change, process change, and identity change. The author made readers understand that the most effective way of changing their habits is to focus not on what they intend to achieve but on who they wish to become. And also, how their identity emerges from their habits; how every action is a validation for the type of person they want to become. So, if, as a reader, you want to become the best version of yourself, you need to edit your beliefs, upgrade and expand your identity continuously.

Chapter three captured how the reader can build better habits in four simple steps, which are: cue, craving, response, and reward. This chapter also captured the four laws of behavior change. The first is, make it obvious, the second makes it attractive, the third makes it easy, and the fourth is to make it satisfying.

The second section of this fantastic book focused on the first law, and it has four chapters in it. Chapter four made it clear that the process of behaviour change always begins with awareness and the need for you to be aware of your habits before changing them. It also has a Habits Scorecard, a simple exercise you can use to become more aware of your behaviour.

The next chapter shows you the best ways to start a new habit. The next chapter also made it known to readers that motivation is often overrated and how the environment matters more. It is often easier to build new habits in a new environment because you are not fighting against old cues.

The next chapter revealed so many secrets of self-control. If you have a problem with self-control, this chapter will show you practical ways of tackling it.

The third section of this book is about the second law of behaviour change, making your habit attractive. So, it is the anticipation of reward and not the fulfillment of it that drives us to take action.

The fourth section of this book is about the third law of behaviour change which explains how to make your habit easy. It would be best to create an environment where doing the right thing is as easy as possible. So, it would be best if you learned to prime your environment to make future actions easier.

The fourth law, which is found in the fifth section of this book, is focused on how to make your habits satisfying. The author made readers realize that they are more likely to repeat a behaviour when the experience is satisfying.

The last section of this book gives advanced tactics on how to go from being merely good to being truly great.

Key Lessons from the book

This is a fantastic book that everyone can read and apply in any aspect of their lives. Some of the lessons I learned are:

Lesson 1: Setbacks are inevitable, as long as we're human.

Lesson 2: The effects of our habits increase with repetition.

Lesson 3: Habits are enforced by soldiering through even with interruptions.

No matter how consistent you are with your habits, it is inevitable that life will interrupt you at some point, but the breaking of a habit doesn't matter if the reclaiming of it is fast.

Review of the book Atomic Habits

I read a lot of books. I read everything and anything and when it is my greatest hobby to hunt down simple books. Atomic Habits by James Clear is a simple book. I love the fact that there are even worksheets based on the book, making it even easier to follow the books instruction.