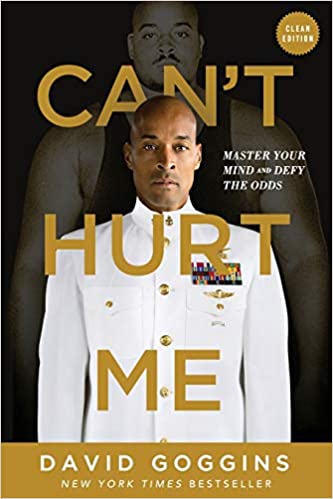 Can't Hurt Me: Master Your Mind and Defy the Odds


Can't Hurt Me is the medium David Goggins uses to take us on his journey from being a near catastrophe to becoming an individual of fantastic repute.

"Can't Hurt Me" is the boost of motivation needed if you are having difficulty achieving some headway in life. David Goggins explores in his self-help memoir the determination to defy the odds and achieve set goals. He reminisces on being abused, bullied, struggling with weight, having difficulties in school, and racial profiling. This book strikingly describes the journey to learn perseverance, embracing failure, and maintaining growth. He effectively teaches dedication, submission, and service.

The bottom line is that life is one big mind game. The only person you are playing against is yourself.


Everyone fails sometimes and life isn’t supposed to be fair, much less bend to your every whim.


You are stopping you, you are giving up instead of getting hard.


Summary of the book Can't Hurt Me

Plagued by a traumatic and abusive childhood, the author watched his mother become a domestic violence victim. At such a young age, he described himself as helpless, confused, and lost. His mother, summoning the courage to start from scratch, completely uprooted all they had known in search of a better life.

The light at the end of the tunnel still seemed so far as the stress & anxiety had taken a toll on him and was compounded by the open racism he suffered in a predominantly white community. Goggins did so poorly in school that he was barely literate and had to cheat and lie his way through classes.

One dream seemed to push Goggins, and that was his desire to join the airforce. He decided that if all else failed, that dream was his safety net. Unfortunately, he failed the airforce entry test, and that was the wake-up call he needed.

After receiving the rejection letter, the author decided, "It was time to get real" in his words.

He looked at the mirror and did not like what was staring back at him. At this moment, he stumbled upon a technique called the 'Accountability mirror.'

The Accountability Mirror is a concept where goals are written on a post-it and tagged to a mirror used daily. The idea is to look at it frequently and assess oneself against the goals, thus making one more accountable. Goggins described the mirror as "motivation to fight through uncomfortable experiences." The writer spent the next six months waking up before dawn, hitting the gym, spending after-school hours studying. He eventually joined the airforce on the third try.

Four years later, David Goggins was discharged from the airforce due to medical reasons. This episode was enough to make him go back to hiding. Food was his way of dealing with the setback, and he slipped into darkness once again, now weighing almost 300 pounds.

By chance, he witnessed a Navy SEAL recruitment advertisement and set it as his next target. He had to attain the required weight, and the 'accountability mirror' once again came to his rescue with the weightloss program.

Can't Hurt Me further outlines David Goggins' entry examination into the Navy SEALs. Through six months of mental and physical resolution and a notorious week filled with 130 hours of pain, the author began the journey towards developing ‘a calloused mind'.

He explains that "it is stepping outside your comfort zone regularly, writing down all the things you don't like to do or that make you uncomfortable. Especially those things you know are good for you. Doing one of them, and then do it again."

'Taking Souls,' a part of the calloused mind ideology involved Goggins looking to gain tactical and psychological advantage over his instructors at every occasion. He believed that remembering where one came from and the hurdles conquered is a fountain of motivation when quitting becomes an option.

After two attempts at Navy SEALs training and having to withdraw on medical grounds, David Goggins knew he had one final shot at achieving his goal. Determined to get through or die trying, he developed stress fractures in his legs. Expectedly, crazy Goggins made it through.

From his ordeal with the Special Forces, the book dives into the writer's ultramarathon career. Nothing previously learned would prepare him for the trials he would have to face when running a marathon.

With his bulky muscular shape, no prior experience, and training, Goggins set out to run 100 miles to raise money for his fallen companions' families. Here he discovered the concept of the "cookie jar."

The cookie jar means remembering past difficulties faced and how they were overcome. Each time individuals overcame a past struggle, they earned a cookie and put it in the jar. David used this in the race, remembering how his victories often came in thirds.

The author used the above concepts and achieved much more. He became the first Navy SEAL and the only member of the United States Armed Forces ever to complete SEAL training, Army Ranger School, and Air Force Tactical Air Controller training.

He competed in more than sixty ultra-marathons, triathlons, and ultra-triathlons, setting new course records and regularly placing in the top five. Ultimately, he set a Guinness World Record for completing 4,030 pull-ups in seventeen hours.

Review of the book Can't Hurt Me

The book describes David Goggins' journey as laden with trauma, pain, stress, and injuries. His endurance, defying the odds, and accomplishing goals is worth emulating. He relentlessly pushed his limits to check how far he could go. Perhaps the most moving part of Can't Hurt Me is that Goggins is like any man; one could even consider him below average. He reiterates that there are no quick fixes and life hacks. Anyone can succeed if they abandon the least resistant path and seek out challenges that impart discipline, dedication, and service.

This gem of a book is more than a motivational speech. Any person could go from the bottom of the barrel to achieving the unimaginable. Experience the journey of a man who did not let his past or obstacles define him and realize that taking life by the horns is just the beginning of the race.