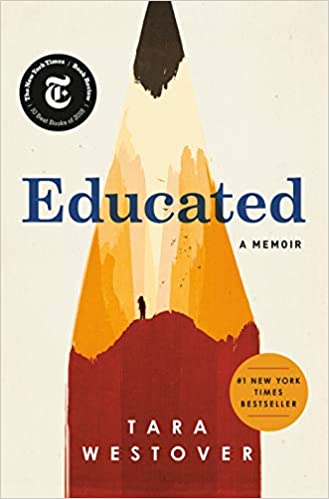 
A bestseller book, a memoir about a young girl who, kept out of school, leaves her survivalist family and goes on to earn a Ph.D. from Cambridge University.

You can love someone and still choose to say goodbye to them .... You can miss a person every day, and still be glad that they are no longer in your life.


The decisions I made after that moment were not the ones she would have made. They were the choices of a changed person, a new self. You could call this selfhood many things. Transformation. Metamorphosis. Falsity. Betrayal. I call it an education.


It’s strange how you give the people you love so much power over you.


Summary of the book Educated

These days we hear a lot about the limits of the US. It may seem like they are the centre of the continent, but they are on the edge of the economic life of the country. Due to this, their social life has consequences too. Usually, the people who live in such a state are distressed and miserable, we are told, just as ruthless and superstitious. Educated is a memoir by Tara Westover, and it is about being from such a place, surrounded by similar people. Her parents were Mormon fundamentalists and had seven children. Tara was the youngest and most curious of them all. Tara’s father Gene was the psychic of their family, fully convinced that the world was going to end at the stroke of the millennium. However, when it did not end, he was very disappointed and confused.

Furthermore, he did not believe in sending his children to school, limiting them from the opportunities the world could offer them. Tara’s family was also not allowed to eat dairy products, and they were considered sinful. On the other hand, Faye, Tara’s mother, largely defers to her husband, even though she sometimes doubted his decisions. She worked independently as a faith healer in the mountains they lived in, and also as an unlicensed midwife. She assisted women with home births, as she had the same.

Tara’s grandmother was against all this; she did not like how her father was depriving her of education. Her grandmother also told Tara that she is a very bright child, and she sees a lot of potential in her. Life of Tara and her family was grim; continually struggling with money, not having enough food to eat and cars getting crashed because they were too old. Despite all this, they were forbidden to go to hospitals, police stations and schools. Tara also experienced a lot of trauma because of her elder brother, who charges into her room while she’s sleeping and fastens his hands around her throat, calling her abusive names just because she was friends with a local boy. There were multiple accounts of beatings, which left Tara emotionally distraught and trapped.

Regardless of all these struggles and obstacles, Tara made her way out of it all. Her early schooling did not involve any formal education, yet her resilience and determination got her to college. In the start, she struggled with her studies, social relationships and identity issues; however, eventually, her hard work gets her a place to do Ph.D. at Cambridge. Through this journey, Tara said she found herself, and she says it is because of her constant desire to get an education.

The main themes in the book are as follow:

The Power of Education

Throughout this book, the power of knowledge is portrayed as the key to finding freedom and living an authentic life. Her constant desire to go to school was so that she has a more prosperous life. She knew from the very beginning that education would bring new potential in her life. She saw how her mother’s life meant nothing just because she wasn’t educated. Hence, for Tara, education allowed her to gain self-confidence and sense of self-worth. It was the power of educated, which allowed her to understand her family better. For example, she was able to learn about Bipolar disorder, which explained her father’s behaviour of being superstitious and paranoid.

The instability of memory

While Tara was writing this memoir, she realised that she felt unsure about her memories. She wasn’t able to retrieve her memories as accurately as she wanted. This problem is aggravated because when she talks to her different family members, they often have different versions of events. All this made her doubt herself because her family insisted that she is lying about the events mentioned in the book. Thus, it is essential to understand that memory might fade or change over time, especially if it involves traumatic experiences.

The conflict between identities

Identity crisis is something that even an adult goes through at some point in their life. However, such people have their identities that start building up as a child. Tara never had an identity of her own as she was forced to have an identity that her father wanted. In short, she did not even have a real identity as she was not registered in the state. She had no birth certificate, no driving license and no hospital records. Later on, Tara has to choose between her identity as a sincere Mormon fundamentalist lady who is a compliant daughter, and her identity as a thoughtful, curious person who wants to have an education and more to life. Hence, this conflict led to suffering and problems with her psychological wellbeing.

Review of the book Educated

I loved this book because it talks about the power of education that many people don’t see until now. There are so many countries, such as those in South Asia, where daughters do not get a chance to education. This book is revolutionary and is telling everyone that education can help you understand the world around you better. There is a lot to learn in terms of psychological problems, social problems and cultural differences. This book is highly recommended, especially to those who are privileged enough to have an education at their doorstep, because for some, this privilege is hard to get.

It can help those who are struggling due to economic barriers as this book teaches “If you can dream, you can get it”. Hence, I would like to encourage everyone to read this because this will definitely open your mind to richer experiences.