Ego Is the Enemy — Summary and Review 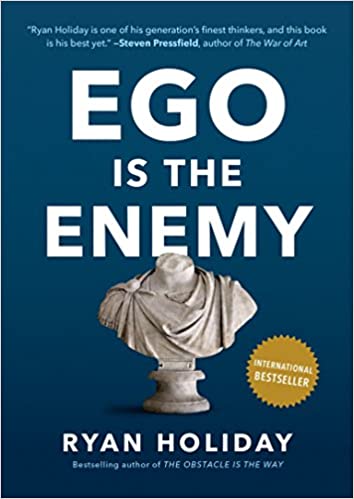 Ego Is the Enemy


Ryan Holiday is no stranger to the twists our ego puts on our perception of the world. 'Ego Is the Enemy' details crucial information on how to control it.

Ryan Holiday comes from a place of pure learning to write the book "Ego Is the Enemy." If you aren't already familiar with his name, he was a young up-and-comer in the professional world. A great mind among elders who were now his peers, he let this superiority change his perception. He credits this occasionally negative change to the part of our emotional brain called the "ego."

With success, particularly power, come some of the greatest and most dangerous delusions: entitlement, control and paranoia.


Those who have subdued their ego understand that it doesn’t degrade you when others treat you poorly; it degrades them.


Impressing people is utterly different from being truly impressive.


Summary of the book Ego Is the Enemy

Holiday's book is split into three parts full of excellent lessons, simple case studies, and nuggets of advice. From these pages, there should be many takeaways and highlights--maybe even enough to write your version. Yet, I found these outtakes to be the most important from each part. Let's begin!

In the first chapter he retells a crucial piece of advice; never explain yourself until asked. The art of knowing when to be quiet and when to use the human gift of a complex expression is crucial to enact this advice. Through "thinking, explaining, and talking about a task, we start to feel that we've gotten closer to achieving it" (Holiday, 2016). We think about it so much; it seems we've given even more effort into the project than we performed, causing a false perception of our parts.

So often our emotions cause less than ideal actions, making it worse on our goals and objectives in the long run. Holiday lists a few choice characters that have either mastered their outbursts or have been controlled by them. Knocking it out of the park for this example, he introduces the little-known background of Jackie Robinson; one of the greatest baseball players in history. Little did most people know, he had an untamable temper that he let loose with almost no restraint. It's controlling the sudden surge of passion that makes a great leader, allowing their plans to take shape with purpose than being ruined by a snap action made in the throw of the moment.

One of the most criticized positions in the US is that of managers and none more so than the office of the President of the United States. In this part of Holiday's explanation, we see that Eisenhower ran his office very similar to his military career. He did his job and trusted everyone else to do their own. In the few examples given, it seems a bit snobbish, but policies and procedures are in place for a reason and Eisenhower was nothing if not consistent for the rules. The most important part of this was, despite being a leader, he stuck to his policies and continued to live his regular life with his free-time. Being in an important position does not mean to be a willing slave to it every waking moment.

To be your most effective self, the idea of sobriety in the face of adversity is important. The kind of sober attitude Ryan Holiday mentions is more stoic and clearheaded in the best and worst of times. It is keeping you in your headspace where your money doesn't determine your mannerisms, and arrogance doesn't distort your perspective. You may be the best at something, or very good, but that should keep you grounded knowing you've accomplished so much and there's so much more to do. In this, Holiday encourages us to keep moving forward and take as many people with us as possible all the while keeping our growth to positive outcomes. Every choice is a fight to stay in the light or darkness, keeping us sober for the better or worse.

This final part of the book is where the best advice lies. We learn best from failure, as we look back on every decision with a magnifying glass and a fine-tooth comb as if we caught lice. Not only are we looking for the pests, but also tracking every step, every touch, to determine where it came from. Who could have given it to us? What dirty habits do we need to nip in the bud? And that kind of scrutiny is what gives us the drive to be better--to avoid next time. So long as you think you can improve the next time, you will be able to conquer your ego.

The danger that most people face is simple; not being appreciated. All the effort we put forth may or may not yield any respect, position, or reward at the end. Holiday says it best; "If ego holds sway, we'll accept nothing less than full appreciation" (2016). In the end, we know what we deserve, but the world is cruel to most. We need to learn to accept that the effort we put in is our choice. At the end of the day, we need to know that we did what was asked of us, and maybe more.

We need to give ourselves the appreciation we deserve, and then only hope those we do it for taking notice. But, if we can achieve this enlightenment well, we won't need others' praise or confirmation.

In most cases, we use this phrase as if we are attempting to create a barrier that we wish for others not to disturb. However, Holiday uses it as a cold shower with a long look in the mirror. As humans, we are eager to become the best version of ourselves or others. We are not above making mistakes, chasing silly ideas, or not owning up to our flaws. With this, the main takeaway is simple. Before you dig deep, take a look around you and yourself. Are you making this more difficult for you and your peers? Are you acting like a caged animal? Are you thinking clearly of all the repercussions of the nextstep you're about to take?

What are the Key Lessons from the book Ego Is the Enemy?

This is after you become studious from "Part I," and it's all about consistency. Once you develop the habit of studying, it should continue. From the echoed words of Ghengis Khans, learning should never end. Now, that's not a direct translation, but it's wise words from a conqueror of lands that Holiday thought worthy enough to include as an example in his text. The same person will never know all the answers, but someone else will. Gather all the information you can in every nook and cranny of the world and hold it near and dear. Never stop your thirst for knowledge and personal betterment.

Leaders of the world, to Holiday, don't follow the whims and volatile attitudes of passion. Instead, they are fueled by a purpose that burns them from the inside with a desperate need to see their goals completed. It is explained that this is often confused with passion. You see, passion is not a constant emotion, but a roller coaster of it surfacing and disappearing again. You seek a renewal in passion to complete something, but as Ryan suggests, it is not necessarily a good thing. Those who have a higher call to action are not passionate, but reasonable in their pursuits with logic and purpose.

Lesson 3: Ego is the enemy

The ego is never quite as straightforward as we would like it to be. It is the swing vote in our decisions as we look between crazy and boring ideas of pursuit. With Holiday, we are assured that failure is always a deterrent in the back of our minds, causing us to fear the possibilities of imperfection. Yet, we are our own persons, and without those critical errors from poor judgment calls or forces ego interventions, we would not be ourselves.

Review of the book Ego Is the Enemy

Reading Holiday's Ego Is the Enemy was one step in the right direction for me, and I hope it continues to inspire courage and confidence in others as they transition to a healthier mentality with their aspirations and achievement. It is written in a basic informative tone, but relatable to most audiences who share the common goal of improvement. I enjoyed reading this book as I was looking for ways to become more comfortable with criticism and not meeting my perfectionist standards. Scared of failure and not receiving praise scared me, as I had tasted what it was like to be noticed and appreciated for work I was proud of. This meant I had a sever aversion to putting my name on anything that was less than 100% ready. Thankfully, this book encouraged me to find next steps to become a little closer to a well-rounded individual.

One who has lived and learned is better equipped to assess others failures. With Ryan Holiday's background, he may be an excellent candidate for this as his book features mistakes throughout history to support his claim. Simply put, everyone has an ego, and some people are worse at controlling it than others. Our downfall is thinking too much or too little of our abilities, and it is a plague on the latest generations. Being too proud is elitist, and being too humble is attention-seeking. It is truly a battlefield of psychological warfare, and with Holiday's help we can identify the best steps to sidestep these awkward encounters and feel more confident in our abilities. The ego is the enemy, and sometimes an argumentative friend.