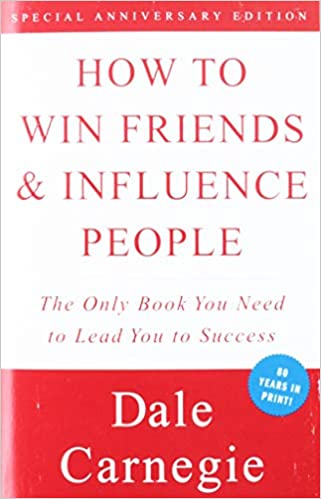 How to Win Friends & Influence People


Dale Carnegie gives us instrumental life skills to hone and develop to make those beside us happier and our lives a little fuller with meaningful connections.

Dale Carnegie was the man who paved the way for soft skill development in the early 20th century. His belief that everyone deserved more opportunities to be their best person guided him to such a feat. He wrote several books, lectures, and various shows to help spread the word to people from all walks of life. With thework How to Win Friends and Influence People, he focused on skills that would benefit those who relied on other people to make a living. People such as secretaries, salespersons, and the entire customer service industry. However, he knew all people could benefit from his wisdom, and did his best to convey those lessons at every point and turn.

Criticisms are like homing pigeons. They always return home.


When you are displeased, it is much easier to criticize and condemn than it is to try to understand the other person.


Success in dealing with people depends on a sympathetic grasp of the other person’s viewpoint.


Summary of the book How to Win Friends & Influence People

There are many things to unpack in Carnegie's four-part book. To make the most of the time and get all the great bits of his advice, we'll look at all his advice, and expand on only a few key points to get most of the book's worth. What it does best is allow us to carefully recall our instances of taking the less desirable path, but also giving us new avenues to follow when it next comes up. In the throes of anger, we often forget what it's like to be on the other side of the issue. Of all the things you can learn reading these chapters, being a simple human being is the best policy of all.

We have justified every action we've taken in life in some fashion. This habit comes so naturally to most of the population and is even more observable in notorious criminals and do-gooders alike. Carnegie outlines this need for justifying our actions by bringing up two prominent killers next to a respected journalist: 'Two Gun' Crowley, Al Capone, and John Wanamaker. We don't criticize ourselves for our wrongs, because we are never in the wrong to ourselves. Even the notorious murderers of the early 20th century saw themselves as innocent bystanders or heroes of their neighborhoods. Carnegie uses their dire circumstances to illustrate that we often live our lives in such a manner; always justifying our actions to ourselves instead of seeing the consequences that will lead because of them. If we want others to see our true intentions, we must have true intentions, to begin with, to keep them comfortable.

Part Two: Six Ways to Make People Like You

The human face tells us a million things. A persons' focus thanks to their gaze, their worries and age thanks to their wrinkles, and the like. But the most powerful place to gather information to Professor James V. McConnell of the University of Michigan is a person's smile.

It's not the mechanical, fake smile most people can spot a mile away that gives us much to go on. An insincere smile will have a more powerful deterrent than you can imagine. It's when we are subject to a sincere grin that we typically melt into a comfortable silence or even a conversation. It's the interested smile of babies and dogs that we're interested in because they are genuinely excited to see us. It is one of the few things people crave and is an excellent place to start practicing making good first impressions.

As people, it is hard not to think selfishly most times. That is why this next skill is so powerful when put into practice every day, at every turn and opportunity. That is the simple "law of human conduct: Always make the other person feel important". We must put aside our selfish aura and think about the person and the goal. The goal should no longer be what can you do for me, but instead how can I help you? It shouldn't be the false, customer service saying, but a simple pick-you-up for the day. This is easily demonstrated by trying to honestly compliment a person. Doing that every day, participating in a short (or even extended) conversation thanks to it is the best policy to make people instantly like you and even remember you for quite a long time.

Part Three: How to Win People to Your Way of Thinking

You Can't Win an Argument

Anyone who has had the pleasure of being in an interpersonal argument, outside of the scope of academics, knows that in the end neither party feels they are wrong. They stick to their beliefs even more so compared to the beginning of the argument. Even when proved wrong, it hardens the relationship and sours the next encounter thanks to the way we perceive conflict. Though Carnegie's work was published decades ago, arguments even in the 21st century tend to end wrong. No one likes to be wrong, and very few look to argue on any given topic in a conversation. The best way to save a relationship of comradery is to simply avoid an embarrassing argument unless it is crucial, but even then, there are better ways to go about it. We'll talk more about that in the crucial lessons from the book.

Part Four: Be a Leader

Let the Other Person Save Face

Pride is a sort of dangerous emotion that often gets overlooked when we think of others, writing it off as unimportant. It is often less important to make the other person feel comfortable and prideful when we face a difficult situation. We are so preoccupied with assigning blame and putting down the other person for their failures. These mistakes escalate their need to be on the defensive and create a serious issue. It is better to do what we can to help them avoid such negative feelings to save face. To keep them happy and comfortable instead of angry and defensive is the best way to have them remember you in a more positive light.

Lesson 1: How to criticize – and not be hated for it

This simple strategy may be the single best way to hand down criticism while also seeing positive results in the long term. Most often, when trying to soften the blow of bad news, we use the sandwich method of positive-negative-positive. However, we like to use the word 'but' in that sentence to introduce the negative issue. It usually doesn't take, because then the person will see the two positives as ingenuine and not try to improve. We need to focus more on acknowledging the positives and setting it up to continue that process.

Lesson 2: How to get cooperation

Relationships are a two-way system, but not quite like a road. Instead, it's more like a river with more twists and turns and dozens of other things that impact the motions. Carnegie gives some great advice to receive the most from a mutual relationship of any kind, and that boils down to goal setting. Asking your friends, colleges, or even employees what they expect from you and vice versa creates a clear dialogue on what both parties need to improve and keep on their minds. This will help keep a social contract of expectations from everyone as well as increase morale and work ethic.

Lesson 3: We are complicated

Throughout the book, we are given dozens of situations and reminders that humans are not always the two-dimensional beings we like to imagine. So caught up in ourselves, we forget friends, coworkers, and even strangers are leading complex lives in any variation of our own. We must remember what we want from ourselves and our new friends and do our best to become the kinds of people that help others on their way for nothing but the smile of satisfaction.

Review of the book How to Win Friends & Influence People

When I think about this book, I'm reminded of my two mentors through college. Both I consider father-figures to me, and while in drastically different fields, I remember how often they would use this book as an example. Carnegie wrote this nearly a century ago, and both men are adamant all people should pick up the book. It's amazing how much one can learn from the words of those long past, but none quite hit such life lessons the way Carnegie does. It outlines things that should be considered basic knowledge, but somehow makes everyone feel slightly dumbfounded once reading. Why didn't I think of that? How could I have forgotten that? Those are just a few questions I had to ask myself, because How to Win Friends and Influence People boils down to one single piece of advice; always think of the other person.

Everyone interested in learning about social aspects of life could benefit from this book in its entirety. It's simple, straightforward, and gives a lot of advice to be stored away until you can finally see the paths open before you when the time is right. Those who rely on others for work or pleasure would also benefit from this book, as we all forget just how similar and different, we can be. If you struggle with seeming more genuine, read this book. If you need to figure out how to be more confident in a social gathering, read this book. If you just like reading perspectives that can apply to any culture on the earth, read the book How to Win Friends and Influence People. All knowledge is wonderful, but it's useless unless you can find meaning and put it into practice.