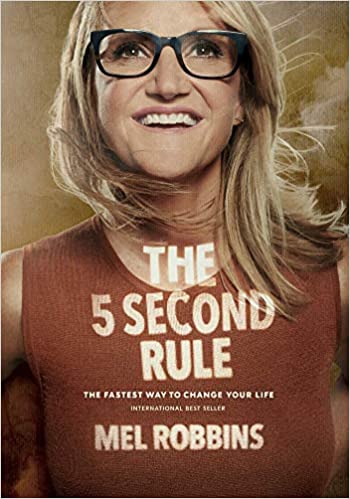 The 5 Second Rule: Transform your Life, Work, and Confidence with Everyday Courage


The 5 Second Rule by Mel Robbins encourages readers to push and motivate themselves through a change of habit.

The 5 Second Rule is an international bestseller written by Mel Robbins, a motivational speaker, CNN contributor, talk show host, and more. The author encourages her readers to transform their daily lives and work routines by looking at them from a different perspective. Robbins advises her readers to use the science of habits to push themselves when faced with a decision by taking five seconds to consider their next move—snooze the alarm or get up? Go to the gym or stay at home? The 5 second rule, a seemingly effortless way to push yourself, is a tool that many of Robbins' followers have successfully employed to increase their daily and overall productivity.

Have faith…I believe you can make anything happen as long as you listen to your heart, do the work, and give up your timeline.


You Are One Decision Away from a Completely Different Life.


You can’t control how you feel. But you can always choose how you act.


Summary of the book The 5 Second Rule

Lesson 1: The correlation between courage and the 5 second rule.

Robbins includes many illustrations, anecdotes, and real-life examples throughout her book. One such example is that of Rosa Parks, an African American woman who refused to give up her bus seat to a white American in 1955. Robbins goes on to discuss how Parks' actions led Martin Luther King, then preacher and activist, to reach out to her. She acted on her gut feeling at that moment, and that impulsive "no" from Rosa Parks sparked a larger resistance across America.

Robbins challenges her readers by askingthem to consider what is holding them back from a small act of courage. Who is to say that one small act of courage won't lead to something important? The moment you have an instinct or gut feeling, listen to it, trust it.

Robbins argues that acting on an instinct or a gut feeling is often connected to acting on a goal—the second element to the 5 second rule. The example she gives is an instinct to get off the couch and go for a run. Acting on this instinct brings you one step closer to the goal of transforming your health.

As straightforward as this lesson is, its implementation gives the power and control back to the individual. By acting on an impulse you can free yourself from the anxiety that comes with decision making. This lesson is the unofficial first step to using the rule.

Lesson 3: Stop waiting for the right time. Push yourself.

Robbins reiterates the same sentiment in the first chapter of the book: if you are searching for that one person who will change your life, look in the mirror. This lesson encourages you to reduce procrastination and, instead, increase your productivity.

By learning and mastering the 5 second rule, you can learn how to change, how to believe in yourself, rid yourself of self-doubt, and live a better life.

Lesson 4: If you do not act within the first 5 seconds you may never act.

The instinct is instantaneous and if you do not act on it, the brain will kill the instinct and prevent you from acting on the thought after the 5 seconds have elapsed. Robbins elaborates on this concept in simplified terms: your brain is attempting to prevent you from going down a decision-making path that is hard, uncertain, or even scary. As broken down in part four of her book, this lesson of courage is meant to encourage you to stop worrying and end your decision-making anxiety.

Robbins acknowledges that the 5 second rule is not a comprehensive strategy. She states that it should be personalized and varied according to each person's preferences. She also remarks that some people may act upon their instincts in less than five seconds. She encourages readers to test the 5 second rule to see what strategy best suits them. It is possible, she claims, to train your brain to become accustomed to the 5 second rule.

Key Lessons or takeaways from the book

Simply put the 5 second rule boils down to these five statements:

Robbins attempts to convince her readers that they are in control of their thoughts, feelings, and actions. Even though your brain may attempt to override, distract, or interfere with the process, you have the final say in determining how to achieve your goals through the 5 second rule. Part five of the book, entitled "Courage Changes Everything," aptly concludes the book. Robbins encourages her readers to become the most fulfilled person they know by building real confidence, pursuing their passion, and enriching their relationships.

Review of the book The 5 Second Rule

The 5 Second Rule by Mel Robbins genuinely surprised me.

I almost felt like I was back in high school in our school's auditorium receiving a motivational talk from a thirty-something-year-old person with a seemingly unachievable success story. I appreciated Robbins' inclusion of her reader's 5 second rule stories as it made it easier to grasp how the reader might implement the rule within their own lives, taking it from unachievable to achievable. To me, the book is useful to anyone who feels like they have stagnated in their lives—be it a nervous high schooler applying to college or an exhausted mother of three looking to head back to the gym.

It is essential to recognize that Robbins is not just a professional motivational speaker, she is an ordinary human being who was tired of feeling defeated. The 5 second rule is a straightforward concept. The possibilities for change by adopting the rule, however, are endless. There is no big secret or magic trick to how Robbins turned her life around—all it took was five seconds.