The Courage to Be Disliked — Book Summary 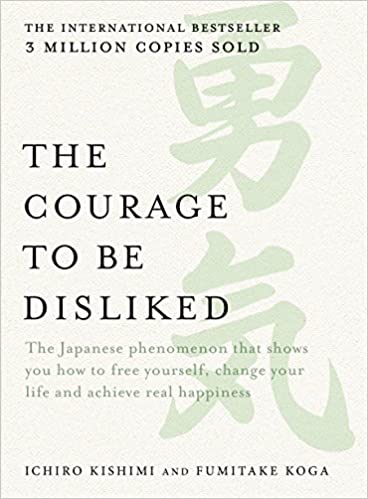 The Courage to Be Disliked


The Courage to Be Disliked challenges all we have been led to believe. From trauma and our past to our lifestyle choices.

The Courage to be Disliked is a self-help book that lends itself to both philosophy and psychology. Adhering to Adlerian psychology, it dares to defy the rhetoric that most of us in the 21st century live by, turning the tables inwards. This is that need to be liked by everyone and conforming to achieve such an unhealthy status.

It poses some simple but powerful questions such as why don’t we allow happiness and ignore our past? By doing so, the belief is that we would be therefore better placed to concentrate on building the future we most want. Its emphasis is on the self and both claiming and taking some responsibility for the choices that we make.

An exploration of how we are our own definers of the paths we take; this is a poignant read and one that questions much of our current ideology.

The courage to be happy also includes the courage to be disliked. When you have gained that courage, your interpersonal relationships will all at once change into things of lightness.


Your unhappiness cannot be blamed on your past or your environment. And it isn’t that you lack competence. You just lack courage. One might say you are lacking in the courage to be happy.


If one really has a feeling of contribution, one will no longer have any need for recognition from others.


Summary of the book The Courage to Be Disliked

Working on the principle of Adlerian thinking, the general essence of The Courage to be Disliked is to offer up another way of reasoning, as opposed to Freudian psychology. For this reason, it does not rely on the belief that past and trauma generally affects and shapes the way we are now. Rather, it dismisses the concept of both trauma and the past entirely.

This is perhaps a most controversial methodology for many who have been schooled in the typical Freudian approach. The book works against what is considered the norm, suggesting it is no stretch of the imagination at all for a person to change or indeed find happiness.

In its dialogue between philosopher and youth, the book pits believer against non-believer and optimist against pessimist. By doing so, it delivers on a most intelligent conversation. However, this is a conversation that anyone can grasp without needing to be versed in the practice of philosophy or psychology to understand its main arguments.

A functioning insight into the teachings of Alfred Adler, the conclusion here is that past should not dictate the future. Yet, it also delivers on a perhaps one of the more highly controversial claims that trauma does not exist.

Implying that life is not hard, it states that we are all capable of choosing our lifestyles. The Courage to Be Disliked works on the premise that many of us merely choose unhappiness for ourselves, and this is a conscious choice. The reasoning here is that our past means we are unable to experience little else. Yet, for the philosopher in this conversation, the past does not exist.

Review of the book The Courage to Be Disliked

I absolutely loved the structure of this book. Set in a conversation format throughout, it is not a typical conventional self-help or guidance book. Instead, it rids of all standard structures, presenting a dialogue between that of a philosopher and an adeptly named youth. The youth is, in a sense, the reader who has a closed mind and has, in some ways, approached this book with a negative attitude, with the philosopher working to change this.

The way the narrative works to highlight a simplistic answer from the philosopher and a long-winded challenge from the youth seems to emphasize precisely how afraid we humans are of change. Still, although we continue to complain about it, we very rarely work to do anything about our current circumstances. Yet, the philosopher’s responses here seem so obvious when spoken out loud, that the book stops you, literally winding you in the process, at many points throughout.

Applicable to each one of us, regardless of our past, traumas, and current lifestyles. Also, an easy to read layout but ultimately more digestible than many self-help/philosophy books on the current market. This is all due to the ingenious use of dialogue to get the many messages and points across.

Although I found nothing to fault about The Courage to Be Disliked, I can imagine some readers having severe issues with Adler’s philosophy. This is that of trauma and past life, not playing an active part in our future happiness — something that may grind with many a Freudian follower.

In a society priding itself on competing with one another and amassing acceptance through likes, The Courage to Be Disliked turns all this on its head! The result is a guide that stops you in your tracks and demands you take responsibility for the path you’re currently travelling. Yet, if that path isn’t the one you wanted – then this is the book that will show you the simplicity of making those necessary changes – and it is all so much easier than one could have ever imagined!

Offering an alternative point of thinking to that of typically Freudian views, it actively encourages us to question our current positions. That is, no matter how uncomfortable this may initially make us. The result is the ability to see clearly how we are often our own worst enemy. This is the book that may also encourage more people to investigate the philosophy they’ve come across in this book regarding Alfred Adler for further reference.

Yes, it may make for an uneasy read for some. But this is merely because, as the youth of the dialogue realizes, it is hard to admit to something that you perhaps do not want to hear. Neither does anybody want to be told in all honesty that it is their fault they are unhappy – seeing as we are all often looking to lay the blame elsewhere.

Making for an incredible reading experience, The Courage to Be Disliked is a most effective narrative and one which, if you are open to its words, can impact and change your life within just a few short pages.

Furthermore, it offers up a way of thinking that creates a meaningful conversation, particularly in this intense 21st century we find ourselves living in.