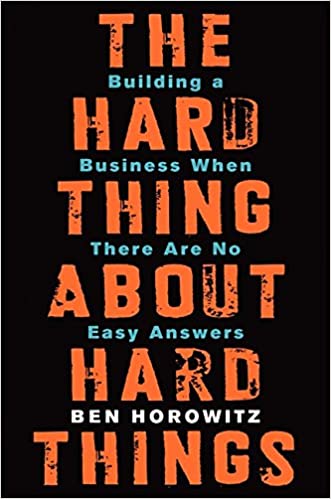 The Hard Thing About Hard Things: Building a Business When There Are No Easy Answers


Entrepreneurship requires hard work, determination, persistence, and planning. This book will teach you how to become an accomplished entrepreneur.

Do you want to become a successful entrepreneur? Do you have a start-up idea in your mind? Do you think you can run a big company? If the answer to any of these questions is "yes", then you've found the right book! You will learn about the strategies and tactics to form a successful company from the CEO of "Opsware" himself. Ben Horowitz, a successful entrepreneur and investor, will teach you about business using his own experiences. He will take you through his journey from rags to riches and give practical advice to amplify your business. You will also learn about the struggles and challenges one can come across while managing a company.


Until you make the effort to get to know someone or something, you don't know anything.


Build a culture that rewards - not punishes - people for getting problems into the open where they can be solved.


Summary of the book The Hard Thing About Hard Things

Ben Horowitz grew up in Berkeley. He studied at Columbia University. After completing his education, he moved to Los Angeles to stay with his father. He met his wife, Felicia, through a blind date and has been happily married to her for twenty-five years. Ben got a job at Silicon Graphics (SGI) as an engineer. There, he met Roselie Buonauro. Roselie recruited Ben for her new startup. Ben had a hard time while working at SGI and decided to quit. A few months later, Ben started working at Netscape. He was interviewed by Marc Andreessen. Ben and Marc bonded over technical knowledge. He then became the in charge of the company's Enterprise Web Server product line.

Netscape had a fierce competition with Microsoft. When Microsoft announced the release of Windows 95 free of cost, it posed a threat to Netscape. Microsoft had a monopoly on the market in terms of Operating System sales. Netscape then decided to profit off Web Servers. Over the next few months, Netscape SuiteSpot was launched. SuiteSpot grew a lot in the coming years.

The company was eventually sold to America Online (AOL). AOL was more invested in media than technology. Ben, thus, decided to form a new company along with Marc. He was going to work on computing cloud. More members, Dr. Timothy Hower and Sik Rhee were joined to the team. Loudcloud was born in 1999. Ben was going to be the CEO, and Marc Andressen was going to be the "full-time chairman of the board". Timothy Howes would serve as the chief technology officer.

Loudcloud started building the cloud structure and hired qualified employees. In just nine months, the company sky-rocketed. Then came what is called the ‘dot-com crash'. A stock market bubble was caused because of significant speculation in internet-based activities. Microsoft was declared a monopoly. Startups saw huge losses and Loudcloud was losing the competition. It was then that Ben decided to sell the stocks to the general public.

The company was on the verge of bankruptcy. Ben, therefore, thought of starting a new Software company, Opsware.

Opsware was the software that ran on Loudcloud. A deal was signed with EDS and Loudcloud was sold for $63.5 million.

Opsware was compatible with Loudcloud only. It wasn't ready to be sold. Eventually, EDS decided to end their contract. This could make Opsware lose most of their revenue. Frank Johnson of EDS was in charge of the contract. He gave Ben and his team two months' time to solve the issues with their product. Frank was fond of a product from a company called Tangram. Ben decided to buy Tangaram to save the contract. The deal was signed, and Tagaram was bought for $10 million. A new competitor, BladeLogic, was in the business to which Opsware lost deals. Finally, a deal was signed with Hewlett Packard, and Opsware was sold for $1.65 billion.

In the book ‘The Hard Things About Hard Things', the author Ben Horowitz talks about the struggles he faced as a CEO and gives insights on how to handle them. Self-doubts can arise; people can doubt their decision of forming the company. Sometimes it's also hard to fire employees. But transparency in a company needs utmost importance. This makes the CEO a reliable person in the eyes of their employees. One should make the decision of firing someone carefully. If the decision is made, the process shouldn't be delayed. Delaying firing someone gives way to rumors. Employees start asking questions about who is going to be fired, and this makes the environment tense. Training managers to fire someone is essential.

Firing an executive can be equally challenging. The CEO must analyze why they want to fire the executive. Only when they're confident about the reasons, the board should be informed.

Most care in a company has to be given to the employees, followed by the products, and lastly, the profits.

Company politics can arise. The CEO must make sure that politics have to be minimal. Politics in a company, simply means employees are trying to amplify their agenda or career without earning it. It's the preference of individual interests over company interest. To minimize politics, promotion should be made a strict process with absolute transparency.

Good leadership quality is one of the major skills a CEO should possess. The CEO must have a clear vision of the company. He/She should have knowledge about finance, product strategy, and marketing.

Selling a company is an important decision a CEO might have to make. If someone wants to know if selling their company is a good decision or not, they should see what potential the company has. If they think the company has the potential to reach greater heights, they shouldn't sell the company. Ben gives an example of Google that received enormous offers. Despite these offers being of more than $1 billion, Google was suitable for an even bigger market. Thus, selling such a company is not a good decision.

The job of a CEO is challenging. The CEO can come across situations that are unpredictable and difficult to come out from. But one should always embrace the struggle, the hardships, and their instinct.

Lesson 1: Take Care of the People, the Products, and the Profits — in that order

Priorities in a company should be sorted. Employees are the biggest asset of the company. This is followed by the products a company manufactures. Profits are at the bottom of the hierarchy and should be given the least preference.

Lesson 2: When Things Fall Apart have courage and appreciation

Firing employees or executives and demoting workers is a challenging task.

These decisions should be analyzed carefully, and the employees should be appreciated for their hard work.

Review of the book The Hard Thing About Hard Things

This book is helpful to people who're interested in launching start-ups. It will work as a guide for you to successfully lead a company. Ben Horowitz, entrepreneur and businessman, walks through the process of running a company successfully using his personal experiences. With a pinch of humor and countless personal advice, the book becomes an extremely interesting read. This book is undoubtedly a kick-start for people who dream big.

The Hard Things About Hard Things is a manual to launch start-ups and discover the way to the top. This book teaches you the skills necessary to steer a company. Along with technical knowledge, the book teaches you other life skills that come handy anytime. I'd definitely recommend this book to anyone who has a start-up plan in mind or anyone who wants to learn leadership skills.