The Millionaire Next Door — Book Summary 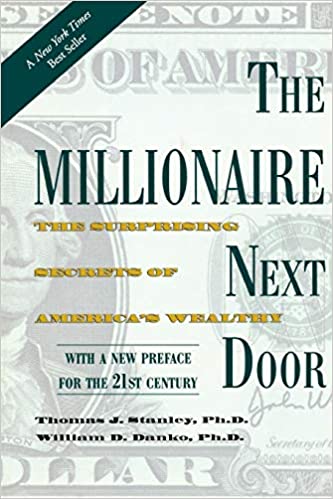 The Millionaire Next Door: The Surprising Secrets of America's Wealthy


One of the best-selling books in the 2000s, The Millionaire Next Door will change your perception of money and millionaires.

The book The Millionaire Next Door, written by Thomas J. Stanley, describes how real millionaires live, work, and think on average.

Some people may not know this, but the current generation has the most millionaires in history. Most people also believe that the rich come from a rich family. But guess what? Over 80% of today's millionaires have accumulated their wealth in one generation. According to Stanley, a large part of these millionaires don’t wear a thousand-dollar suit, drive Ferraris and Porsches. Instead, they live below their means. In this book, you will see that not everything is what it seems when it comes to wealth.

Whatever your income, always live below your means.


Wealth is more often the result of a lifestyle of hard work, perseverance, planning, and, most of all, self-discipline.


Summary of the book The Millionaire Next Door

According to a survey done by the author Thomas J. Stanley, the average American sees wealth as a sign of many possessions. However, in the millionaire's view, wealth is having funds, assets, and real estate.

According to a survey done by the author Thomas J. Stanley, the average American sees wealth as a sign of many possessions. However, in the millionaire's view, wealth is having funds, assets, and real estate.

By spending money rationally, saving, and investing funds, those with lower incomes can become richer than those with high monthly incomes and high spending.

According to Thomas Stanley, your expected net worth is calculated using the following formula.

Reflect: What is your net worth? Is it above or below expectations?

During a survey conducted by the author, he invited a group of millionaires to a restaurant. On the menu, there were expensive items like imported champagne and caviar. During the interview, they were offered these items. However, they didn't ask for any of these expensive things. Instead, they ordered snacks and cheap beer. Surprised? Nowadays, television calls millionaires' people who spend money buying boats and spending a lot of money on nightclubs. Yes, a part of the millionaires has this lifestyle. However, most live a simple life, with a stable marriage and without extravagance.

Reflect: If millionaires can save money, why can't you do the same?

Millionaires Set Goals and Spend a Lot of Time Planning

Most millionaires plan every minute of the day, as there is no way to be productive without planning. Some prefer to listen to audiobooks every day for idle time. Others define the number of contracts to be closed and do not give up until they reach the goal. In addition to personal goals, they also have the financial goals: never spend more than planned, always invest, and multiply the money. Regardless of what your goal is, set one and be responsible with your money!

Being Financially Independent Is More Important Than Having Status

Millionaires always focus on having financial stability instead of spending money on unimportant things. Besides, most of them are financially independent, receiving no assistance from the government or family members. They know the importance of making their own money.

The book cites the example of two high school classmates who chose different paths. One chose to go to college and the other started his own business. Today they have the same annual income, but the one that opened the business has assets and no debt, while the college guy has a big debt and no assets. The vast majority of people who have higher education and earn more than $ 100,000 annually do not have accumulated wealth.

The book recommends that the rent should not be more than 20% of your gross monthly income, as the place where you live is directly linked to how much you spend per month. For example, if you live in an upper-class neighborhood, supermarket costs, and expenses related to your home will also be higher. Furthermore, this money could be invested in other ways instead of spending on expensive rentals. When buying a car, you should also be careful about how much you will spend. You should never put your budget at risk to buy a car.

Reflect: when was the last time you spent a lot of money on something? Worth it? Would you spend it again or do something else with the money?

There Is no Recession for Truly Millionaires

Millionaires think long term. This mindset leaves them prepared for financial crises. They have more than one source of income, for example, multiple companies and several investment funds, which generates passive income. The book The Millionaire Next Door shows step by step how they plan investments and spending so that they are practically unaffected by financial crises when it happens.

Millionaires Do Not Receive Cash Flow from Parents

Many parents find that providing money for their children is a way to make them successful. It's a huge mistake. When you give money to your children, you are not teaching them how to make money. Instead, you're teaching them bad financial habits. It is only possible to learn when you are not in your comfort zone. It is much better to teach children about the value of money and how to invest, instead of providing cash flow for them.

Debts are a big problem in the budget because most of the time debt comes with interests. Avoid overspending!

Don't Waste Time, Just to Save a Little Money

Let's suppose you save a hundred dollars a month. At the end of 5 years, you will have saved six thousand dollars. From this point on, you have two options: keep saving one hundred dollars a month or make an investment. The first option is safer, while the second option is riskier, but the chance of financial return is greater. Take a chance and don't think small.

Money Is Linked to Happiness

Don't get me wrong, but there is no way to live in peace knowing that there are many bills to pay and no money. Money does not solve all problems, but it will certainly provide comfort for you and your family. Besides, millionaires have access to the best hospitals, gym, and food, which makes their life expectancy up to 15 years longer than middle-class people.

Reflect: What have you been doing to become a millionaire?

Millionaires always plan to use their time as effectively as possible. They know that time is money. However, time is more than money; it's your life. Always focus on time optimization, as it is the difference between success and failure.

Most of the ordinary people live among paychecks and do not have investment funds. A lot of people, despite earning a lot, spend more than they earn. How to avoid this? Read this bestseller and find out!

Review of the book The Millionaire Next Door

I found this book very interesting because it made me understand how millionaires live. I liked the tables and graphics used to explain the author's point of view. Another topic that I found interesting is that millionaires do a lot of money-saving and investing, which makes them very rich in the long run.

This book is perfect for those who want financial freedom. You can achieve financial independence by spending less than you earn and investing carefully the rest of the money.

You need to do financial planning and follow it. It doesn't make sense to use money to impress people who aren't an important part of your life. Instead, use this money to invest and save for retirement.