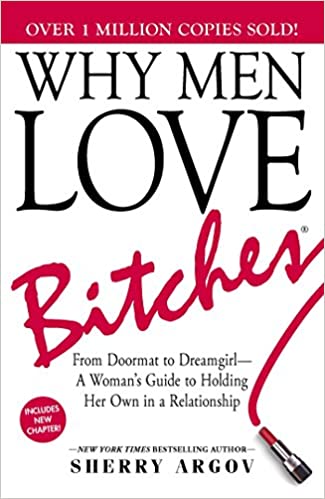 Why Men Love Bitches: From Doormat to Dreamgirl―A Woman's Guide to Holding Her Own in a Relationship


Sherry Argov's book Why Men Love Bitches speaks to the hearts of women in a no-nonsense tone on how to be assertive and irresistible to men.

Why Men Love Bitches by Sherry Argov is a national bestseller, published in thirty different languages. This book will take you on a self-introspective journey that'll lead to a major change in dating and self-esteem. A new unique perspective to male-female relationships, its principles focus on transforming the reader into a more independent individual who makes herself a priority.

Be an independent thinker at all times, and ignore anyone who attempts to define you in a limiting way.


That's the big picture, your happiness. And health. You should never care what a man thinks of you -- until he demonstrates to you that he cares about making you happy. If he isn't trying to make you happy, then send him back from "whence" he came because winning him over will have no benefit.


Anytime a woman competes with another woman she demeans herself.


Summary of the book Why Men Love Bitches

The author, Sherry Argov starts off the book with an overview of the situation that multiple women find themselves in as a result of being too nice. The "Bitch" in this context isn't the abrasive person usually associated with the label, instead, she is kind and yet strong. She is aware of her femininity but doesn't see it as a weakness, nor does she use it as an unfair advantage and weapon against men. She can give, but unlike the woman that is too nice, she can realize when to stop.

The author goes on to explain the point of the "mental challenge" and what it means, both to men and women. Women rarely understood what it meant, while it was immediately clear to men. Men related to neediness/lack of it while women related it to intelligence.

Sherry Argov goes on to explain the central theme of the book. The Nice Girl is profiled and light is shed on the kind of woman she is. She's the woman who gives too much because she wants her affections to be reciprocated equally. She is seen as needy, clingy, and insecure. She is probably that way as a result of societal conditioning. Magazines, men, and other women have told her what she "needs to keep a man". Most are probably advice to overcompensate and leave nothing to chance. Then enters the other type of woman the Author writes about, this is "The Bitch", the woman that lives life primarily for herself, she is the one who sustains the man's attention. She intentionally refuses to attempt to bend over backward for anyone, instead she most likely has others doing so for her.

Sherry Argov has a few tidbits called the "Attraction Principles". They are notes in the book further explaining the nice girl versus the dream girl points. Sherry Argov plows ahead in the book on how the "bitch" handles the show while convincing him that he is in control. The Male Ego has been an object of study for many years. The ego is man's motivation for so many things because men need to feel "manly" and this is a major point that many women fail to understand. The right push and pull are guaranteed to have a man fulfilled, which translates to a happy partner.

The Nice Woman doesn't understand this but nags and continues to push him away with her lack of perception and understanding. The Nice Woman gives all of herself away, and as a result, she becomes needy because she expects to get just as much effort from the man, which is hardly ever the case. After all, he doesn't even have an opportunity to make an effort because The Nice Woman is making all the effort.

"The Bitch" seems to "have a life". He is more intrigued by her and wants to be reassured of his position in her life.

In the book Why men love bitches, Sherry Argov methodologically lays out a game plan for the nice woman to follow to "shed her neediness cloak". She must learn to focus on herself first, rather than asking him to focus on her. She should make sudden moves and alter the routine and keep him on his toes!

The Bitch doesn't overcompensate; she stands her ground firmly. She has a strong will and she believes in herself. Many books may teach you to play games, but I believe this is the most important and empowering message of all; Love yourself, focus on yourself primarily and thus attract a great mate and continuing to do the same throughout the whole relationship.

What can we learn from the book Why men love bitches?

Lesson 1: Being a more independent woman is good for you

The major thing we can learn and the major theme of the book is that an independent woman lives a more fulfilled, happier life.

Lesson 2: When looking for a partner, opt for a quality relationship

Dating has to be done carefully and effectively to maximize the results and to get quality relationships out of all your efforts.

Lesson 3: Take care of yourself

This book teaches women to be less subservient and more assertive. The author seeks to emancipate women from unreasonable societal standards that only coddle men and place enormous responsibility and expectations from women. The reader is admonished to take care of herself, make a point to express herself, and being disciplined in her relationship to maximize the relationship.

Review of the book Why Men Love Bitches

The book Why men love bitches is hilarious, empowering, and straight to the point. Your feelings may get slightly hurt but you know it's for your good. The author Sherry Argov expresses her points in a blunt, but relatable way. The book is written interactively, such that you respond to the author unconsciously. This isn't one of those books that teaches you 50 Ways to keep a man, it teaches you multiple ways to respect yourself, love yourself, and thus, attract good men. It sends a positive message to women to take care of themselves and put themselves first before seeking out partners. I wouldn't say the book is perfect as it has its flaws. For example, the reader runs the risk of seeing relationships as a bunch of games between two partners, which may not be positive for long term relationships, nevertheless, it's a good read, and it is sure to teach you some solid truths.

Sherry Argov takes her time to explain a major principle that women all over the world have missed for years. This book is primarily for women who are "too nice" or clingy. It is an admonition/wake up call to these types of women to better understand themselves, what they want and to ensure they do not lose themselves in dating and yet still hold in the balance being kind to their partners.