Albert Einstein – From Scholarly Failure to Forefather of Science 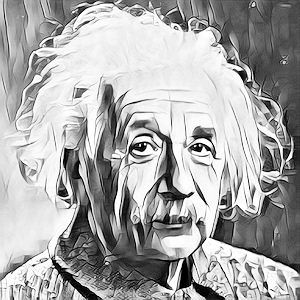 The story of Albert Einstein


Albert Einstein was a man who faced a lot of early-life backlash, yet still went on to become one of the most academically praised men to ever live.

Albert Einstein is most known today for his theory of relativity, E = mc2, along with his Nobel Prize in physics. However, how did he achieve this success and what obstacles followed him along the way? In this short piece we will discuss this.

Upon his graduation from the Swiss Polytechnic Institute, Einstein hit his first road-bump in his adult life. He was 21, unemployed and had no idea what path to follow. His reputation as a student was in tatters from his mediocre schoolwork and his tendency to skip out on classes, meaning many of his teachers did not chomp at the bit to give him a job opportunity academically either.

As a result, to get by in life he had to work several jobs just to survive. Around this time Albert's father passed away, and he passed thinking of his son as a complete failure in life. This knowledge of his father's thinking of him left Albert absolutely heartbroken.

Later into his adult life, Albert had to divorce his wife and lose access to his kids just to focus on what he believed in, his work. He was hellbent on proving that light can indeed bend, which of course, many other academics felt he was delusional for this thinking. Without any family and with the stress of his work piling on, Einstein began to fall ill both mentally and physically. This was not timed well too, with his work having to be put on the backburner due to the beginning of World War II. Being a German-Jew left Einstein in constant fear for his life and survival too during this time, meaning there was little time to relax whilst not working.

Eventually, Albert Einstein would go on to achieve wild success in the scientific field and finally get to the stage of proving his doubters wrong. He would go on to prove that gravity is a pushing force instead of it being previously considered a pulling force.

As well as this, he would go on to be the man to answer the question in regard to why the sky is blue, and what decides this in 1910. He concluded that the phenomenon was to be known as 'critical opalescence' and it proved that this effect is caused by the scattering of the light in the skies atmosphere where individual molecules are splitting. This is what lead to the discovery of the reasoning of the sky being blue.

To further his reputation even further, Einstein would eventually receive one of the highest and most prestigious awards possible, when he won the Nobel Prize in 1921 for his paper that determined that light was merely a collection of particles. This discovery from Einstein opened up an entirely new avenue for his fellow academics and the world of science in the field of quantum physics to paths and ideas that had previously been pushed away as delusional or were completely unexplored.

However, what most probably encapsulates Einstein's scientific and academic career and what he is still most known for today is his theory of relativity, or the idea that E = mc2, this discovery was what lit the scientific world alight in ways that Einstein never expected he could do. This discovery opened broadened landscape of what previously was thought in the subject of physics at an academic and scientific level, despite the fact that it took a number of years of stress-induced work from Albert Einstein himself before his ideas and theories on this subject were recognized to be true by his fellow physicists.

Lessons We Can Take from Albert Einstein's Life

In Einstein's early life, he could have easily played a victim card and wallowed in his sorrows from his father's opinion of him and his eventual passing, along with his professional and financial positioning that he found himself in following his graduation, but instead, he strove for something more than what he had become known as during his years as a student. He never allowed his situation to be seen as a situation of permanence, and always thought that at some point, he could change the path he had ended up in for the better. This is something we could all take from Einstein's life when things are not going our way, or our plans do not unfold how we previously would have expected.

Einstein lost so much at the hands of following what he believed to be true. He gave up everything he had in life on the path to prove what his heart felt was right. He had been labeled delusional and brushed away by his fellow academics for his theories and ideas, and yet despite this, he never gave up on these ideas and set out on the path to prove his ideas to be true to show it in the face of those who once tried to deter him from what he knew to be true. This is something we could all use in life when we consider giving up due to the opinion or judgment of our peers.

Overall, Einstein was a man who faced many curveballs that were being thrown at him on his path to success. However, he decided that these curveballs, no matter how hard they hit him, he would recover from the blow. He never let his early adult life and the opinions of those around him at that time define him, as he went on to achieve so much in the scientific and academic landscape. His overcoming of the trials and tribulations on his path to glory are all stories that we can take and learn the lessons from on our own path to pursue what we feel is right in our lives, and thus, this is why Albert Einstein is still one of the most successful and academically praised people to ever live.