Alphonso Davies: The Bayern Road Runner who fought his way to the top 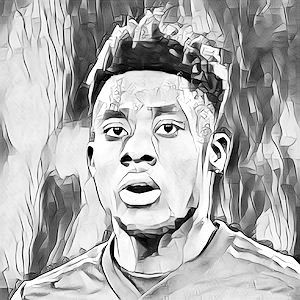 The story of Alphonso Davies


The story so far: How Alphonso Davies went from uncertain beginnings to being one of the hottest prospects in European football.

After Bayern Munich were crowned Bundesliga champions following a 1-0 victory over Wolfsburg in June, a characteristically humble Alphonso Davies was left shocked in a post-match interview; he had broken the Bundesliga speed record after reaching 36.51km per hour in the match. At only 19 years of age, Alphonso's career is looking incredibly bright. However, his journey so far has not been simple. The Bayern Road Runner has faced many trials and tribulations on his way to the top.

Davies was born in a Ghanaian refugee camp. His place of birth was a consequence of his Liberian parents fleeing a war torn Libya. Born into such conditions, Alphonso's origins should make those of us who are born into a happy, stable family a lot more grateful. Many of us have the privilege of growing up with the knowledge that food and other necessary resources will be provided for us. This was not the case for Davies; resources are naturally scarce in a refugee camp. If there is no food - as his father has said - then people will die.

Luckily, Alphonso and his family were eligible for resettlement in Canada. Living in Canada would have been a more stable existence for the young man. However, it is still no walk in the park compared to most; having moved about so much in his youth, Alphonso never really had a true home - even when settled in Canada, it took him a long time to be granted Canadian citizenship. There, just like in Ghana, he found himself in a liminal state - an outsider.

After a great deal of effort, Alphonso finally successfully applied for Canadian citizenship in June 2017 at the age of 16. A keen footballing prospect, Alphonso finally got the chance to play for his adopted homeland, and in the process, became the youngest player to ever represent Canada. After a rocky start to life, Alphonso had finally found his place - things would only continue to improve from here.

Having earned himself a short term contract at the MLS' Vancouver Whitecaps for the 2016 Canadian Championships, Alphonso's blistering pace and ability on the ball quickly earned him the recognition of the rest of the clubs in Major League Soccer. This left the Whitecaps with no option but to snap him up to a first team contract.

On the 16th of July 2016, Alphonso became the second-youngest player in MLS history and the youngest player in the league at that time. His impressive game-winning performances began to attract the interest of some of Europe's elite clubs. In a matter of years, Davies had gone from struggling to get Canadian citizenship to being scouted by the likes of Chelsea, Manchester United and Liverpool. 2017 was an even stronger year, with Alphonso being listed as one of the top 60 rising talents in world football by The Guardian.

The 2018 MLS season saw Alphonso win both the player of the year and goal of the year awards for the Whitecaps. His stock was through the roof at this point, and finally one of Europe's biggest clubs snapped him up; Bayern Munich came in with a $13.5 million bid - a record for an MLS player at the time - which was eventually accepted. Alphonso bowed out of the Whitecaps on great terms, scoring a brace on his final appearance for the club.

He certainly wasn't a hype package and he made that evident when he came to Bayern. When he Alphonso scored against Mainz in the Bundesliga, he became Bayern's youngest goalscorer in over 20 years. More recently, his stellar performance leaves him ranked as one of the best left backs in world football. Now a Bundesliga champion and the fastest player ever to grace the league, it is amazing to think how much the teenager has achieved in the past few years.

The recently crowned rookie of the year can only get better at this point. His life, now so full of hope, is so far from the uncertainty and fear of his younger years.

Alphonso's achievements are all the more impressive considering his start in life. Below are the main lessons we can take from his story.

1. You can bypass luck

It is fair to say that Alphonso's introduction to this world was not a particularly lucky one. So many of us are very lucky when we are born. Being born into a family home, with a stable source of income and never having to worry about where the next meal come from is something most of us take for granted. Alphonso didn't have the privilege though. However, this didn't leave either him or his family despondent. His achievements may have seemed impossible at one time, but his willingness to succeed and not to be limited by his environment make Alphonso Davies truly inspirational.

In this article, we've covered an extremely impressive range of achievements for a fully grown man, yet alone a 19 year old! It is clear from the constant record-breaking that Alphonso is never satisfied; new goals are set daily, it seems. He was not committed when he played for his national team for the first time, nor when breaking speed records. Alphonso is an incredibly humble young man, who will only continue to break records if he maintains his insatiable personality.

At just 19 years of age, Alphonso Davies has already had a more storied career in football than most who lace their boots. His accomplishments, though remarkable, have not made him at all arrogant. One can only imagine that his tough beginnings have taught him that there is no mountain too big to climb. Most importantly, we must learn from Alphonso Davies that no victory should ever be so sweet that it makes us slow down. If we follow his attitude, we will continue striving through thick and thin.