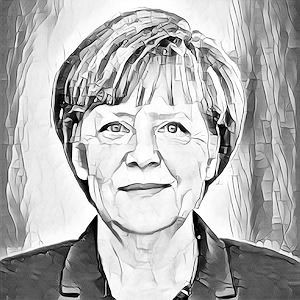 The story of Angela Merkel


Angela Merkel has fought for her beliefs and rose Germany to new heights in light of constant challenges.

Angela Merkel has had a long and extensive career in politics, mainly and most notably as the Chancellor of Germany. She has led the country to become known and seen as the most fruitful and well-run country on the planet, especially in light of their handling of the financial collapse of 2008 and their handling and containment of the Coronavirus very early on. She has also gone on to be described as the most powerful woman on the planet in some cases and seen as the 'de-facto' which means 'the decider' of decisions within Europe, highlighting her and Germany's political prowess amongst the continent.

She has often been criticized for her past, growing up in a post-World War 2 Germany, she was involved in the Free German Youth which, despite it being an attraction for most children during the days of the German Democratic Republic, is still seen as an organization of propaganda to the world.

Merkel also has a huge fear of dogs, which stems from being attacked by one when she was of younger age. This would crop up later on when Vladimir Putin would attempt to belittle and intimidate Merkel during a press conference by allowing his Labrador to walk freely around Angela, however, she showed no signs of backing down when highlighting the reasoning behind Putin doing this by saying 'I know why he had to do this, to prove he is a man, he is afraid of his own weakness'. This shows her handling of corrupt and toxic masculinity in her presence when it had attempted to intimidate her in a public setting.

As well as intimidation from outside leaders, she often receives criticism from her own country, when she allowed and continues to allow hundreds of thousands of Muslim refugees into the country to seek refuge. Despite the heavy criticism for this, she continues to stand by her decisions as the correct ones to make given the circumstances.

Angela Merkel is now into her third term of power for Germany, and of which she may still run for a fourth term, having not yet ruled that out. Her longevity in charge of the country is highlighted by her often being quoted as the most powerful woman on the planet, as well as the 'de-facto' leader of the European Union, which would be that she is the decider of major decisions around Europe, highlighting once again the level of political dominance she has risen the country of Germany to following the 2008 financial crisis.

She is actively working towards improving Germany's contribution towards pursuing the slowing or stopping of climate change, with her rather sudden decision a number of years ago to decide that up to 17 nuclear power plants would be set to be shut by the year 2022, which is now just around the corner. With being on the forefront of the climate change challenge, she has ensured that Germany was one of the most successful countries to be on the forefront of bouncing back from the financial collapse of 2008. Whilst many other leaders fell at this stumbling block, she ensured that Germany was one of the few countries to prosper from this situation across the globe, cementing its place now as a result as one of the most innovative and sound countries on the planet, as highlighted by their medical expertise in handling the Coronavirus so swiftly in comparison to the rest of the world.

She has managed to increase the minimum wage on several occasions during her time in charge also, showing her care for the families where every cent increased on their weekly wage matters towards getting through every day of their lives.

As things stand, her standing up to powerful and insecure leaders such as Vladimir Putin and Russia, who use their intimidation tactics to try and belittle her during that now-known press conference, she has stood up and made her dislike known for him and figures like Putin who attempt to use outside factors to hide their insecurity as a male figure. She is an inspiration for women all over the world in being a successful female politician in a male dominated political party, as well as being in a male dominated world of politics.

What lessons can we learn from Angela Merkel's life?

1. Go with What You Believe in

Despite judgement, Merkel has gone with her heart on many occasions. Most notably with her decisions regarding foreign and Muslim refugees being allowed to enter Germany by the hundreds and thousands. She has continued to stick by her beliefs despite active criticism, which is a lesson that we can all learn from, to follow what we believe is the correct and moral decision regardless of what outsider opinions are saying to us at the time.

Angela Merkel has stood up for herself and made her opinions on domineering figures across the world known. Most notably, Putin, who to many would be a man not worth actively facing or criticizing due to his political power and ability to intimidate those around him. Despite this, she has made her dislike for him and his way of doing things known, as well as openly criticizing his insecurities as a man for his childish intimidation tactics on her as a woman. She is a woman who stands up for herself regardless of the figure who is attempting to belittle her along the way.

In conclusion, Angela Merkel hasn't always had a full backing on her decisions, yet despite this, follows what she believes to be right anyways. She is a woman who stands up for herself, as well as a woman who rebuilt Germany in light of one of the worst financial collapses in modern times. She has ensured Germany is top of the pile when it comes to political dominance and assurance in Europe, as she has cemented herself and her country as some of the most powerful and successful entities on the planet.