Arnold Schwarzenegger: The Man of Many Mediums 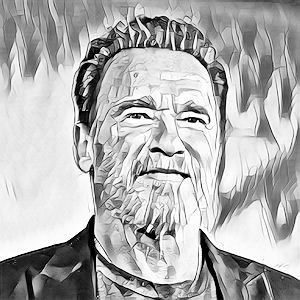 The story of Arnold Schwarzenegger


Arnold Schwarzenegger has become an icon. In this article we will go over the trials he faced on his path to stardom.

Arnold Schwarzenegger is now known as one of the main faces of bodybuilding, along with being an actor who was the face of some iconic characters in movies such as the Terminator, and even beyond that he defied all odds in branching out into politics. But how did Arnold get to the point in his life where he finds himself today, and what obstacles stood in the way on his path to becoming a modern icon of so many mediums?

Arnold’s first major set-back in his adult life came with his immigration and change of scenery upon his move to the United States of America. He had arrived in the New World with no money to his name and with little knowledge or grasp of the English language. This all made everything seem very outlandish and difficult for Arnold. He was a keen bodybuilder, and always strove for that as his dream profession; however, he needed to get by. He had to put the bodybuilding to the side in place of work, as he took on a job as a bricklayer to earn money to survive.

The main moments that would devastate Arnold’s life would arrive a year between one and other. In 1971, his brother had died in a car crash, and only a year later, his father had passed away from a stroke. To make matters worse, Arnold was required to miss his own father’s funeral due to having to attend training for a competition at the time.

As for his venture out of bodybuilding, Arnold faced initial criticism in the acting world. His demeanor, accent, body-type, and name were all labeled as ‘not suited’ for acting in movies. This did not deter Arnold from pursuing his career into acting.

Just to establish the work ethic that Arnold had and the expectations he set for himself, Arnold would often break into closed gyms, as well as make himself sick if he had missed a workout. He states that he would be unable to even bear the thought of looking at himself in the mirror if he had missed a workout at the time. This shows his incredibly high standards he set for himself both mentally and physically in his pursuit of bodybuilding. Arnold was so dedicated to his bodybuilding, that he even went AWOL during his time serving his mandatory military service in Austria, just so he could attend a bodybuilding competition, this earned him a week of prison time.

Arnold would go on to achieve his dream and win his first of seven Mr. Olympia titles at the ripe age of 23, this win had made him the youngest winner of the competition ever, which is a record that he holds still to this very day.

In his acting career, despite the initial negative stigmas that were placed upon him in regard to his name, accent and body-type, he decided that was not going to deter him from following his next venture, typical of Arnold. He decided that all those features of himself that were deemed odd for movies, would instead be flipped on their head to create an iconic character and person within the movie industry. I think it is safe to say that his plan had worked out in the end.

To really try and complete a trifecta of rocking the boat in terms of expectations and branching out, Arnold then moved into a career of politics despite having absolutely no political background. He had won the election on both occasions in his original running and his re-election campaign with a landslide of the votes in back to back elections as he was elected to become the governor of California. Arnold's majorly successful branch into politics showed that despite his lack in politically experience, he was popular amongst the majority of Californians at the time of his election.

If there is one thing to take away from Arnold’s career, it is that he never stayed in the one place. He branched from bodybuilding, to acting, to politics and excelled in all the fields he adapted himself into. He is the embodiment of breaking expectations and moving between professional fields.

2. Be hard on yourself, it breaths improvement

Arnold Schwarzenegger was always hard on himself almost to a fault. The stories of him not being able to stomach looking at himself in the mirror if he had missed a workout are a prime example of this. Arnold never cheapened out on himself, and despite the negativity he would lay on himself a times, it was always done with the intention to breath future improvement.

3. Never let your previous experiences & endeavors define your future ones

Arnold was a man who bounced around from field to field, excelling in all. Despite his judgments from others in regard to what persona he had created from his previous fields in his career, he never let them define what his future step was going to be. Arnold was never one to give in and let his past define his future.