Barack Obama – Overcoming Odds to Run The US 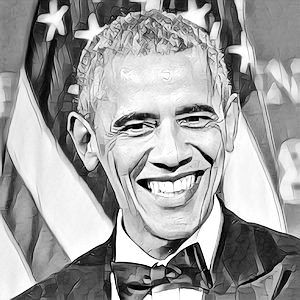 The story of Barack Obama


Barack Obama had managed to become the first black president of the United States despite his lack of identity and family struggles in his childhood.

Barack Obama achieved the unthinkable in becoming the first African American president of the United States of America, along with being the 44th president of the long list of names. He has broken his fair share of life barriers, as well as achieving unimaginable accomplishments throughout his life so far. This short piece will go over some of the setbacks that Barack faced throughout his life, as well as some of the achievements he accomplished in spite of these challenges that he had to overcome.

Barack Obama grew up without a father figure to lead him through his life, as his father had abandoned him and his mother when he was just the age of two, this would go on to prove even harder for Barack when he realized his father had died in a car accident in Kenya some 19 years after he had abandoned Barack and his family.

Barack also had the struggles of being stuck within a mixture of cultures, having connections to the white community, black community, Hawaiian community and when he moved to Indonesia with his mother, the Indonesian, Catholic and Muslim communities. He attended both forms of religious schooling during his time in Indonesia, and despite not coming from a religious household himself, he embraced this. He could have very easily hidden away in fear of all the cultures he faced in a new country, but instead he embraced them and attempted to learn and educate himself through these new experiences.

Obama lacked a father figure or a role model in his life when approaching his adulthood, and when deciding to try and live his life as a black man despite his connections to all these different cultures, he was confronted with self-doubt and confusion as to what it truly meant to live his life as an African American man.

His struggles as the President go on forever, but his main struggle came with the fact that the republicans still ran the state senate, however he attempted to adapt to this, which will be mentioned later.

As previously stated, Barack could have easily retreated into his shell when faced with the cultural shock that he experienced throughout his early life, despite this, he faced the differences head on and attempted to try to educate himself and learn from these new cultural differences rather than fearing them.

He had passed almost three hundred bills towards assisting the poor, as well as children and the elderly of the nation. He had also assisted majorly in the recovery of the country's economy following the 2008 crash, with the unemployment rate at the time he had left office in 2016 being more than half of what it was when he had entered office.

He was also key in negotiations between the United Nations in regard to Climate Change, especially in the production of the Paris Agreement in 2015 which required 197 nations to attempt to reduce the global carbon emissions of the world.

He had also managed to eliminate Osama Bin Laden for the crimes he had committed against humanity, specifically for his involvement in 9/11, something that was a major milestone in his time as president of the United States. He had also managed to ban 'enhance interrogation' which was something that had been used consistently by president George Bush and the CIA, it was banned under the Geneva Convention as a result of Barack Obama's campaign to do so.

Overall, Obama's accomplishments in his life and especially during his time as the 44th president of the United States could go on forever, so as a result, I have only compiled a short list of some of his most iconic moments and achievements during his time in office.

Throughout his life Barack Obama has faced so many difficult challenges. From family and cultural issues to presidential conflicts, he has managed to overcome them all in the long run, however. He adapted and continues to adapt to every situation he found himself in throughout his life regardless of the competition or challenge he faced. His story is that of inspiration and defying the odds.

Barack Obama was a man who had to constant changes of view, culture and worlds around him. From the constant adapting between racial differences between the black and white halves of his family, as well as adapting to the cultural and religious changes of his time in Indonesia, he faced many changes that he could have easily hide from, however, instead he embraced with head on with a view to learn from them, not shun them.

Overall, Barack Obama did not have a simple upbringing with a lack of a father figure and being raised by a single mother. As well as constantly having to adapt to new surroundings as well as struggling with his racial identity, all the way up until the challenges that he faced during the eight years he held in office as the first black president of the United States. His story is one of defying the odds that had been pit against him, and rocking the apple cart of life, per se. His story is one of inspiration, and one that we can all take a lot of life lessons from to incorporate into our own lives on the path to discovering our true dream and purpose in this world.