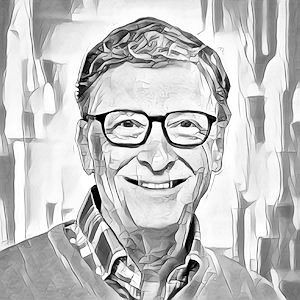 The story of Bill Gates


Bill Gates went from a shy student to the richest man on earth, in this piece we will discuss this.

Bill Gates is a business and success magnet at this point in his life. His philanthropist attitude is something that has brought him to the point of being one of the most successful men on the planet, mainly through his work at Microsoft. There were many steps and risks that Bill had to take to get to the point he is at today, and in this short piece we will go over these risks and how he overcame his fears.

Bill was going into his adult life as an introverted who was largely anti-social throughout his later years in high school. Bill had struggled to leave his comfort zone throughout his whole life and planned on pursuing a safe-bet career as a teacher, due to his stellar reputation as a student. However, this was all to change when his friend, Paul Allen convinced him to abandon his path of becoming a teacher to assist him in pursuing a business venture in computer programming. This would be the first time Bill would attempt to leave his safe-space and move outside the box he had put himself in figuratively.

Bill had felt immense levels of fear when he was following through with dropping out of college to pursue him and his friend's idea with Microsoft, and on many occasions he struggled to stay in the business and leadership mindset due to his antisocial and shy nature at heart. He struggled immensely initially when it came to hiring employees, with fears of his failure constantly on the horizon, and as a result of potential failure would have come the loss of income for many families, as many of his employees were a lot older than him. Bill struggled heavily with anxiety around every corner in his early life and business ventures.

Eventually, a lot of added pressure would be placed on Gates, as his long-time friend and fellow founder of the company, Paul Allen would decide to depart from the company. This is where Bill's traits and mindset began to truly flourish, however. He and his project of Microsoft would go on to establish itself as the most successful computer software company of all-time from this point forward.

He would then go on to achieve personal landmarks, becoming the youngest self-made billionaire at the incredibly young age of just 31, and before his 40s he had managed to become the world's richest man. However, despite all the wealth, Bill did not hoard it. He had become known for his notable charity work, donating stocks in estimations of a valued $5billion initially when he started the Bill and Melinda Gates foundation with his wife. As of now, the foundation is one of the most successful foundations in the modern-day, with an estimated $50billion in raised assets to its name. Bill was quoted in 2011, stating that the majority of his wealth upon his death will go into the foundation too, going towards trying to eradicate poverty, lack of food and disease all over the world.

One of the highlights of Bill's life achievements would come in 2016 when he was awarded the highest possible civil honor, when he was awarded the Presidential Medal of Freedom by Barack Obama for his work as a businessman and his work in the development and cutting-edge progression of the software industry. Along with this presidential recognition by his country, Bill Gates had also been named in Time Magazines 100 most influential people of the 20th century, a prestigious list exclusive to people who have changed the course of the last 100 years for how humanity lives their life.

1. Do Not Hide in Your Shell, Step Outside Your Comfort Zone

Bill Gates was originally like many of us, and retreat to his safe zone whenever he had encountered something daunting or risky in his life. Taking the more traditional and safer bet for his career was always the path that was on his mind. However, the opportunity and belief that Microsoft had presented him with was too good of a chance to turn down despite the fear and anxiety he encountered that came with stepping outside his comfort zone. His success for doing so speaks for itself and should be taken as a lesson to not retreat to safe spaces whenever our heart longs for more.

Bill Gates had to learn swiftly to leave his introverted self in the past when starting up Microsoft. This was highlighted especially when the man Bill had started Microsoft alongside, Paul Allen had decided to leave the company, leaving a lot of the pressures and eyes on Bill. However, Bill by this point had decided to confront this new leadership mentality head-on and allowed him to develop new traits that would be vital for his business and life decisions down the road.

Bill could have easily stayed and followed his set path of becoming a professor through college, but when the chance for his heart to call for something greater came calling, he knew he could not let that feeling pass him by, so he dropped everything and snatched the opportunity to follow what his heart and intuition had been calling for him to do. This was a moment of self-realization, and is something that we as people should always be searching for and recognize when it slaps us in the face in our lives.

Bill Gates was once a man of introverted nature who was dead set on following his safe path of becoming a teacher, however that all changed when the opportunity to do something more with his life arose, despite the fears and anxiety that it made him feel when dropping all his plans to pursue this opportunity. This was a decision that made him the success he is today, and was a story that all of us can use as inspiration to follow our risky opportunities in life when they present themselves to us, as we never know where they will take us.