Dalai Lama (Tenzin Gyatso) - A Message of Leadership and Peace 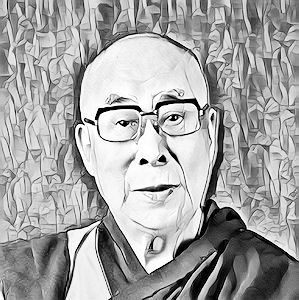 
The 14th Dalai Lama, Tenzin Gyatso faced rare tasks, being both politically and spiritually responsible. We will go over his everpresent message of peace.

The Dalai Lama had a lot to be concerned within his life. He initially would have had to be able to adapt to handle the pressures that comes with being the most holy and spiritual figure of a nation, that of a role which comes with such high levels of expectation and reputation to follow up upon.

However, his most unique and fearful challenge would come during the 1950s, when China had begun their invasion of Tibet, the Dalai Lama’s homeland. In very unconventional fashion, the Dalai Lama had been appointed into becoming the political head of Tibet during this time, meaning the Dalai Lama would have to adapt to a role that previously was not seen to be expected from the spiritual figure of Tibet, all combined in with one of the most stressful and fearsome times in Tibet’s modern history, being occupied by such an old, large and powerful nation such as China.

Eventually, Tenzin would be forced to leave his homeland of Tibet in the face of China due to their ongoing efforts in the invasion of Tibet. Something that no doubt would have been a huge struggle for his holiness both mentally and physically. He would go on to seek refuge in India in 1959 as a result.

One of the signifying moments of his reign as the Dalai Lama would have come with being recognized as having political power of Tibet, something that would have previously been seen as unconventional and not expected of the spiritual leader of the nation.

He would go on to receive the 1989 Nobel Peace Prize for his leadership of Tibet during China’s invasion, where he insisted on a non-violent approach to achieving the countries liberation from the giant country of China at the time. He would receive plenty of more awards as time went on, with his collection of awards spanning well over 150 as of the current day, mainly for his constant preaching of the message of a peaceful approach to life’s issues, as well as his preaching on the environmental issues our planet is facing currently. He has visited over 67 countries spread across 6 continents also.

As well as preaching, he is literarily astute, being involved or directly authoring himself over a hundred books during his lifetime also.

What can we learn from the Story of the 14th Dalai Lama?

The Dalai Lama had to approach and face head on a very odd scenario as the spiritual leader of Tibet, that being appointed the political representative and leader of the country during one of the country's most challenging and fearful times. Despite this, he hit the ground running in the role, and held his nerve with his peaceful approach to salvaging what he could of his homeland despite the ever-present threat of China being on the horizon in their bid to invade and occupy the tiny country of Tibet. He took on an unconventional role and excelled in representing both himself and his homeland in the best possible light at the time despite the terrifying prospects that he and his country were facing.

2. Maintain a Message of Peace.

In a world that is very unjust and politically divided at the moment, I think many of us, especially people in positions of international and local power, should and could learn from the ways of the Dalai Lama. Regardless of the scenario he finds himself in, the message is always a peaceful one from his holiness. He approaches even the most fearsome and threatening scenarios with a soft and peaceful touch. If all people were to approach their mindset and actions with that of the Dalai Lama’s consistent approach, then the world would certainly be a safer and more accepting and all-round better place for us all to live in together as one.

Despite the pressures that come with representing a nation on a spiritual level, and the pressures of that role being thrusted upon someone without a choice at such an early stage in their life, Tenzin Gyatso has excelled in his role as the spiritual leader of Tibet. He also excelled in his role and did his spiritual role justice when taking on the rather unconventional role of political leader of Tibet, something that is not a regular occurrence for a Dalai Lama. He did himself justice in his message of ever-present peace, he did his nation justice on their path to a non-violent liberation from one of the world’s biggest nations in China, and to this day, since being recognized as such an influential and inspiring figure, has achieved so much during his long-lived lifetime. Something that will be surely extremely difficult for the next Dalai Lama to match when that time comes for Tenzin Gyatso to pass on the torch to the next spiritual leader to assume the role of the 15th Dalai Lama.