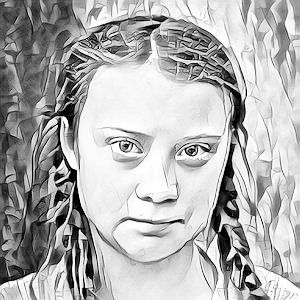 The story of Greta Thunberg


Greta Thunberg is an inspirational story for the ages who is hoping to change the world and the way we think about climate change.

A Small Girl with a Big Voice: How Greta Thunberg Rose to Fame and Raised Awareness of her Message

Greta Thunberg is currently one of the recognizable names on the planet right now. This is because she is trying valiantly to protect it and spreading a powerful message. She provides hope that future generations will actively and passionately fight to save the planet. The 17-year-old activist is a source of inspiration for one and all. Below is Greta's story.

To call Greta Thunberg precocious is a bit of an understatement. For most children, climate change is a reality. However, it is not usually a big cause for concern; education syllabuses around the world rarely give the catastrophe that is climate change the attention it deserves.

Very few 8-year olds understand and appreciate the levity of this crisis like Greta did; the first time she can remember hearing about it, it thoroughly depressed her.

The effects of climate change are, if we think about them seriously, horrific. Natural disasters are more frequent than ever, more than 1 million species are at risk, the polar ice caps are melting, and possibly worst of all, we might be too far gone to do enough to save our planet.

This is the stark reality Greta came face to face with, and fully understood, at the age of 8. We might compare it to the harrowing, existential angst that comes when we think of our own death for the first time. Such feelings come and go for most people, but not Greta; she felt utterly crushed by the way things were and our worsening situation.

Her depression resulted in her refusing to eat and losing 22 pounds in a couple of months. To make her life more difficult, she was then diagnosed with Asperger's syndrome - a disorder that affects social interactions - OCD and selective mutism. The latter of which is a form of social anxiety, with which a person cannot speak in certain situations.

Greta's childhood was quite clearly far from ideal; not only was she plagued by an understanding of climate change beyond her years which depressed her, she suffered heavily with anxiety. She was outraged about how complacent the powers that be had been about this catastrophe, and yet she could not speak out about it.

If we fast forward seven years from the aforementioned diagnosis, we notice the first sign of hope for the young girl. Still affected by her involuntary quietism, Greta submitted an essay for a local newspaper about climate change. She won. Three months later, she began protesting right in front of the Swedish parliament, because she had noticed they were lagging far behind the carbon emissions target agreed upon by world leaders 3 years prior.

Greta continued to strike, eventually going viral. She has traveled around Europe striking and regularly attends climate conferences. She travels by train to all of these events, so it is clear she is really making an effort.

Even though Greta is doing all this activism while still technically a minor, there is a crowd of haters - like there always will be - who try to undermine her project. The most common accusations she faces are that she cannot be writing her own speeches on account of her asperges, or that she is too young to understand climate change and therefore acting as a mouthpiece. However, what these people seem to forget is Greta's depression and other diagnoses from a very young age - her passion is not at all conceited. This, we can be sure, is a minor blip for Greta - she has dealt with considerably worse than internet trolls.

Arguably Greta's most defining moment so far has been her speech at the UN Climate Action Summit in 2019. Again, Greta called out countries that were failing to meet were not making the carbon emission reductions which had previously been agreed. Thunberg targeted world leaders in her speech, claiming that they had failed her. "I shouldn't be up here", she claimed. Greta would be back at school in an ideal world, and yet she wasn't - we are living in a world that is far from ideal. Although Greta claimed, world leaders claim to be trying their best with climate change, all this amounts to is futile gestures; "How dare you. You have stolen my dreams and my childhood with your empty words". These are incredibly passionate and meaningful words to come from a girl who is not yet even 18.

Although burdened from a young age with depression and various other issues, Greta Thunberg has overcome about as much as she has achieved. Here are some inspirational lessons we can take from her.

Greta still suffers from depression and her other social disorders. However, she has made them into strengths. In terms of her depression, Greta became a climate activist to try and force change and thus minimize her depression about climate change. Also, Greta's speeches are considerably more powerful because of her selective quietism; when she speaks, it is because it is necessary. Her ability to look upon her weaknesses as strengths is an incredibly useful message for us all to take on board.

What many people noticed at Greta's famous UN speech was the anger in her voice. Many must have initially thought she was overreacting. However, she really wasn't; calling out these countries who are perpetuating climate change has massively raised awareness. Greta's confidence to fearlessly call out injustices is a remarkable feat for such a young person. She teaches us that we too have the power within us to change things we think are wrong and that the first step towards doing so is calling them out.

Great's ability to transform her weaknesses into strengths is inspiring. We should all be able to look at her and see that we are never too small to make a change and that our voice matters when it comes to calling out injustices.