J. K. Rowling – A Woman Who Went from Benefits to Billionaire 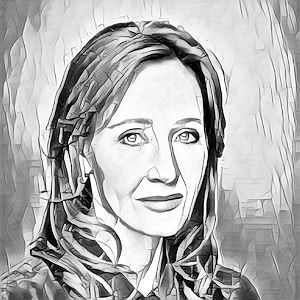 The story of J. K. Rowling


In this short piece we will go over J.K Rowling’s path to success and how she achieved it.

In the modern day we all know J. K. Rowling as one of the richest and most successful women and authors of all-time, but how did she amount to the peaks of her career from the lows of the troughs that she had found herself in?

J. K. Rowling did not have an easy ride on her way to the top. Right as she began writing and beginning work on the concept for the now ever-famous Harry Potter book series, she became aware of the news that her mother had passed away. This news had sent Rowling into a seemingly endless depth of depression, leaving her with little to no inspiration to continue working on her dream concept during this time, putting all her hopes and dreams on hold.

Eventually, to try and recover from the news, she had moved temporarily to Portugal to teach English. However, after a failed relationship abroad, she had returned home with further trouble on her doorstep, with a baby daughter as a single mother. She was on unemployment benefits, something which for many who have experienced it, is string thin, as well as mentally draining. It makes you feel like you are in a bottomless pit. She had barely enough money to get her and her daughter by in life, however, she would continue to work on her dream idea for Harry Potter whilst her daughter slept.

J. K. Rowling would then go on to devote her life into the concept of her dream of Harry Potter, only for that idea to take twelve rejections from publishers over the years. This constant feed of rejection made Rowling feel like her concept that she had devoted her life’s work to was doomed to follow the same path she saw herself as, which was a failure.

Despite her numerous setbacks in life, and numerous rejections of her dream idea, she found solace over time in doing what she loved, which was writing. This meant that J. K. Rowling, despite how much she had been rejected and pushed down, would not give up, as this was her dream, and nothing was going to get in the way of her and getting her dream out to the world.

Over time, her determined hard work would go on to bear fruit. Harry Potter as a book would go on to be published and to this day the series of books have grossed over $7.7billion in revenue. This insane level of success would be what would cement J. K. Rowling’s place as the first female billionaire author in history. As her book popularity grew more and more, and showed no signs of slowing down, it then branched into an arguably even more successful series of movies. This was the stage of J. K. Rowling’s life where all the trials and tribulations she had faced in her past, as well as her dedication to her craft, passion and family, began to finally show. She had finally made it.

Lessons to be learned

1. Setbacks are not to be wallowed in; they are to be learned from

When J. K. Rowling’s mother had paced, or when she had ended up on benefits as a single mother, she could have easily have thrown in the towel and wallowed in her sorrows, instead she ascended above her sorrows. When her book was rejected the first, second, third or even twelfth time, she could have easily wallowed in her sorrows then too, but she learned from whatever trials and tribulations had been thrown from her and decided to use these lessons from the obstacles in her life to learn from them and move beyond them in her work.

2. Current situations are temporary if you make them temporary

As previously stated, J. K. Rowling found herself in one of the most vicious loops and cycles that the lower-class society can find itself in. That being the cycle of unemployment and unemployment benefits. Along with the constant social pressures, stigmatization and judgement that comes with being unemployed and on benefits, there was a lot to point toward Rowling never getting out of her then-current situation. However, if there is anything to learn from this, it is that Rowling decided when her time in this deadly cycle was up, she made the moves and showed the determination and passion to end the loop that she had found herself in for most of her life. Not just for herself, but for her daughter.

3. Social barriers and expectations do not determine your outcome

As a woman in a lower-class background, J. K. Rowling started her adult life off in an immediate disadvantaged situation. She could have decided to cave into the general outcomes that are almost seemingly pre-determined for women in lower-class backgrounds, but she didn’t. As well as her passion being writing, with her dream of being an author being notoriously difficult as a line of work to find wild and sustainable success in, she could have let her circumstance and the social expectations of women authors determine her future, but once again, she did not. She decided she was going to re-write the statistics and shatter those pre-determined expectations and go on to become the first billionaire female author.

J. K. Rowling may look now like she had an easy ride on the wave to success, but that is far from the case. A lifetime worth of challenging setbacks and rejection that she faced would have been enough to deter anybody from their dream and to give in to the seemingly endless loop of negativity and struggles. However, it did not deter her. It only drove her on in her path to becoming a female and literary icon whose ideas spawned the most successful book series and one of the most successful movie series of all-time.