Malala Yousafzai: From a Critical Condition to Changing the World 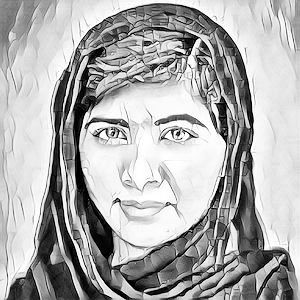 The story of Malala Yousafzai


Malala has overcome adversity and has achieved a lot at such a young age. She became the youngest winner of the Nobel Peace Prize at just 17 years old.

Malala Yousafzai was born on July 12th, 1997. She is an activist for female education and on top of this, she is also the youngest Nobel Prize laureate. Such a resume is an overwhelming feat for anyone at any age. And yet, it is all the more impressive for Malala to have achieved all of this. Below, we will run through Malala's storied journey so far, as well as how she overcame adversity, and what kind of lessons we can take from her inspirational story.

Malala was born in Mingora, Pakistan. For parts of her childhood, this was a popular area for tourism. However, the area eventually came under the control of the Taliban. This had a harrowing effect on Malala, especially when the Taliban began attacking the school which her father had founded.

At the age of just 11, Malala began to speak out against the terrorist organization. Outraged about the Taliban attempting to deny her right to be educated, Malala started to write for the BBC about her experience as a budding learner under the authority of the Taliban. Although she carefully wrote under a pseudonym, she was eventually found out.

It was then that the death threats towards Malala and her family began. This must have been an extremely worrying time for the young girl and her family. Not only was Malala walking around with a target on her back, her father was too; As an anti-Taliban activist, he would also surely be targeted in whatever attacks were being planned. They thought the rage of the Taliban might be directed towards him - surely they would not harm a young child?

However, on October 9th, 2012, the Yousafzai family's worst nightmare became a reality; on the bus trip home from school, Malala and friends were stopped in their tracks by a member of the Taliban, boarding the vehicle with a gun in hand. He demanded to be told of Malala's location; “Who is Malala?”

Although her friends tried hard not to reveal which one of them was Malala, the gunman had everything revealed to him by the body language of the other girls. With his target in sight, the armed man lifted his weapon. Malala was shot to the left side of her head, the bullet eventually hitting her spine also. She was in a critical condition with a swelling brain. It is heartbreaking that this girl was the victim of such horrific violence merely for wanting an education. How pertinent that the attack came on her return trip from school.

It seemed that Malala would be just another valiant name written in the water. Silenced by an oppressive regime, Malala, it seemed, would never receive the education she fought for.

This certainly was not the case. In fact, Malala made a remarkable recovery from the injury she suffered at the hands of injustice. Although initially receiving treatment in Peshawar, Malala was transferred to a hospital in Birmingham. It was here that she was taken out of her medically induced coma. Although there would be a grueling path to recovery, there was a light at the end of the tunnel. Malala may have been physically weaker after this life-changing incident, but her determination to fight for the right for one and all to be educated was stronger than ever - her tumultuous path thus far had motivated her beyond all belief.

Malala's remarkable recovery was highlighted by a speech she gave at The United Nations (UN) just nine months after the attempt on her life. In her speech, she urged all those around the world to pay more attention to women's education. She didn't think enough was being done to ensure women had the freedom to be educated and called on world leaders to change the world in line with her views. Just nine months after her near-death experiences, Malala was trying to change the world once more, starting where she left off. In a powerful moment of the speech, Malala declared that the attempt on her life gave her strength and contended that pen and paper are much more effective weapons than guns will ever be.

Since her speech at the UN, Malala has gone on to regularly campaign for women's rights to education and has been the recipient of many awards. Most notably, she became the youngest winner of the Nobel Peace Prize at just 17 years old. Malala's fight continues to this day. Education is, as she says, neither eastern nor western - everyone deserves to be educated.

Now, Malala is now living one of her personal goals - studying at Oxford. This is a far cry from the young girl who was on the brink of death after fighting for her right to be educated. Now she is studying at one of the most prestigious universities in the world and fighting for change day after day.

To say that Malala is a figure of inspiration would be the understatement of the century. Below are a few of the countless lessons we can take from this truly inspiring woman

1. Don't give up on your beliefs

Even when faced with an insurmountable threat like Malala was, she did not let this stymie her belief and determination to fight for change. Malala ultimately realized that the consequences of her fighting were merely a means to an end. No matter how difficult it might be, don't like life dampen your ambition.

2. Do not have a final goal

Malala has achieved an insane amount at such a young age. One of the most inspiring things about this is her desire to continue setting new goals for herself and to never be satisfied. This works for her in both a personal sense - recovering from her life-threatening situation and getting into Oxford - as well as a more general sense - endlessly fighting against injustices. Malala is aware that the fight will never be over and thus she will never stop fighting for what she thinks is right.

As you can see, Malala has overcome adversity from a young age. She fights against injustice even when the risks are colossal. Malala is a beacon of hope for each and every one of us who fight for what they know to be right.