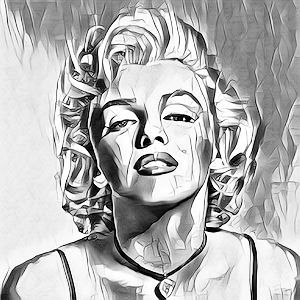 The story of Marilyn Monroe


Marilyn Monroe was a famous actor, model and singer, and despite her tragic ending, she left behind a legacy that will live on for years on end.

In the modern-day Marilyn Monroe is known as one of the most iconic and probably *the* single most popular sex symbol in history. As well as this, she was a renowned actress, singer, and model, proving a jack of all trades, as well as being one of the women who transformed the view society had on sexuality. Despite all this, Marilyn's ending was a tragic tale, but not one that did not have its ups for her in leaving behind a well-regarded legacy.

Marilyn struggled with her family life very early on, never getting to know who her biological father was, as well as being passed around orphanages and foster homes due to her mother's inability to fund or look after a child at the time. Her family had had a history of mental illness, which would eventually begin to show in Marilyn early on in her life, showing significant signs of paranoia and delusional thoughts. As an example, Marilyn believed that her neighbors had murdered her beloved dog and sliced him in half when they had accidentally hit him in the street one day.

She witnessed her first significant trauma in relation to death in 1950 when her then-boyfriend had passed away. This whole ordeal is what really sent Marilyn on a downward slope very quickly. Lytess, a woman who worked for Marilyn and shared a home with her, would return one night not too long after Marilyn's boyfriend had passed to find her sprawled out on the bed, white as a ghost with her mouth filled with sleeping pills. Marilyn enforced that this was not a suicide attempt, however the warning signs were beginning to show with what Marilyn was struggling with mentally.

Come the 60s Marilyn's depression had gotten so bad that she would on many occasions not even be able to bring herself to sit up, having to do her makeup lying down even. It was clear that Marilyn had got to the point of no return mentally at this stage.

Not too long after, in 1962, Marilyn had been tragically found dead in her apartment, and with a history of drug use and a heavy reliance on pills and medication, it was labeled as a suspected suicide at just the heartbreakingly young age of just 36. It had seemed that the writing was on the wall for this tragic end to Marilyn Monroe's short life when her demons had eventually gotten the better of her.

However, despite her life's tragic ending, there was plenty for Marilyn to be proud during her short time on this Earth. She had overcome her troublesome childhood to beat the odds in a rapid rise to stardom, being labeled the fastest rising star of 1952. Just a year later she was given the title of Sweetheart of the month for the famous Playboy magazine.

She also was renowned for her acting ability, obtaining nominations for BAFTA awards on two occasions in 1956 and 1958, as well as a Golden Globe nomination for her role in Bus Stop. She would star on the Hollywood walk of fame in 1962, the year of her passing and would go on to be ranked as the 6th most influential female superstar of all-time just before the turn of the millennium, cementing her place in history.

However, she was most known for her boundary breaking in terms of sexuality and how society at the time and even now views and accepts sexuality, proving to become an icon in that area of the world of entertainment. She was a revolutionary for sexual acceptance.

Marilyn Monroe's life had gotten off to an awful start, with a background and childhood that for most people would define the rest of their life and career. Despite this, Marilyn rose from the ashes of her childhood and achieved levels of fame that few people have ever since matched. She still remains a legendary figure in pop culture today almost 60 years on from her passing.

2. Sexuality is Subjective and You Should Embrace it

Marilyn Monroe was brought up in a very patriarchal world, where men dominated. She was also brought up in a very conservative world for women, with sexuality being viewed as something that was to be frowned upon. Despite this, Marilyn broke the barriers and would go on to redefine what the views on sexuality were to be seen as, with her role in embracing her sexuality no doubt having an impact on the world we live in today where sexuality or lack thereof being something that is embraced by many all over the world, with it being celebrated rather than being shunned in disapproval.

In conclusion, Marilyn Monroe was a woman who defied all expectations that her early life would have seemed to have determined for her, going on to become a cultural icon of her time, but remaining one in the modern day, arguably having more of a legendary status than she did during her life time. She broke all sorts of boundaries for embracing one's sexuality and accepting sexuality as something to be celebrated rather than shunned. Despite her tragic end to her extremely short life, Marilyn Monroe did enough in her short lifetime to span the decades on the horizon of the Earth's history, cementing her place as one of the legendary greats of modern times, with her legacy stills sending shockwaves and lasting impacts to this very day.