Nelson Mandela – The Man with a Vision for South Africa 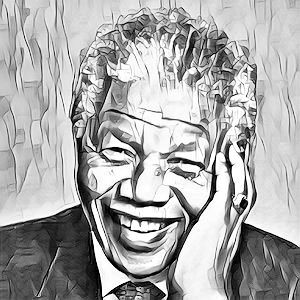 The story of Nelson Mandela


Nelson Mandela was an icon of South Africa and black rights, in this piece we will go over his story of setbacks, hope and patience.

Nelson Mandela was the man who became the first black representative of state in South Africa in the 1990s after decades of serving unwarranted prison time. Alongside being a literal leader for his country, he was a figurehead for the revolutionary changes in South Africa for its racial divisions and issues between blacks and whites in the country.

Nelson Mandela’s father died very early on in his life, leading to him being raised by Jongintaba rather than his family. This was something Mandela would struggle with as part of his phase of upbringing and growing up in early life.

Eventually, he would go on to pursue a movement and mentality of black activism and racial equality in South Africa. However, he would become a target due to this activism, despite its innocent nature in the 1950s, being arrested. It was during his court proceedings over the next half-decade that he would divorce his wife Nomzamo, proving to be a hurtful and stressful half-decade for Nelson.

Eventually, he would be sentenced to five years of prison time upon returning to South Africa from being underground in 1960, after spending some time learning about guerrilla warfare tactics after abandoning his nonviolent message to protests due to the murder of innocent and unarmed black South Africans at Sharpeville in 1960. This was a turning point for Mandela. However, not even by the end of the decade, Mandela would receive a life sentence in prison, even barely escaping being sentenced to death in 1964. However, this would become the moment that would define his life, not end it.

Mandela would study to become a black lawyer and would achieve that goal upon passing at South African Native College. As well as this, he would later go on to become involved in the forming of the Freedom Charter document, which in short, called for a non-racial social democracy amongst South Africa.

Despite his eventual life-sentence in prison, he would be released from prison in 1990 by then President de Klerk. He was chosen by de Klerk to be the deputy president of the ANC, and would eventually go on to become the president of the party a year later in 1991, paving the way for Mandela into the path of politics, leading on to him receiving the highest honor in 1994, when he became President of South Africa after so many years of struggles both mentally and physically. He would use both his role in the ANC and his role as President to attempt to bring about peaceful, non-racial democracy to all of South Africa.

He would eventually retire from politics in 1999, deciding not to pursue a second term as President of South Africa, and would go on to lead a life of activism and representation as an icon of his country and as an icon of black equality across the world. He would have a day named after him in 2009, being acknowledged by the United Nations as Nelson Mandela International Day, which takes place on the 18th of July annually. Nelson would eventually pass away in late 2013, having lived a full life and leaving behind an iconic legacy that will live on forever in not only South Africa, but for the entire world as a lesson of racial equality and human equality regardless of gender, race, color, disability or anything else that may lead to someone being seen as different. We are all the same. We are all human, and that is the message that Nelson Mandela’s life left behind with all that he had done.

1. Fight for what you believe in

Mandela spent the majority of his life fighting for black and racial equality in his country of South Africa, and seemingly never deterred from that goal of achieving racial equality in the country despite his countless set-backs, especially when receiving the ultimate set-back of life imprisonment. He would continue to dedicate his life to racial equality in South Africa, even after being released from prison in 1990, and even after being elected as President of South Africa in 1994. He never gave up on what he believed in, regardless of the consequence of his beliefs and where they would land him on his path to justice.

When imprisoned for life, Mandela could have easily given up hope and wallowed in his sorrows, and of course on many occasions he would have fallen into that abyss in prison, however he always bounced back with a positive and patient outlook that all would turn out okay.

He would use the hope of his family to remain positive from prison, constantly trying to remain an active father despite his separation from his children. Mandela’s biggest assisting tool during his time in prison was hope. The hope of being free, the hope for his country, and the hope of seeing his family again one day were all things that would lead to his immense positivity and patience despite his situation. This was largely one of the contributing factors that got him through the majority of his sentence in prison, and I suppose, when we lose everything, the only thing they cannot take from us is a positive outlook and our hope and that was something Mandela realized and hung onto for as long as he could.

In conclusion, Nelson Mandela is an icon for humanity, and a life that can and should be learned from as a beacon of hope that one can achieve whatever so long as they do not give in to the world around them. He was a leader and activist for those racial discriminated against and racial/black equality in a racially unjust world. He was an icon for South Africa and a man who rose from the ashes into the highest seat in his countries land, becoming president.