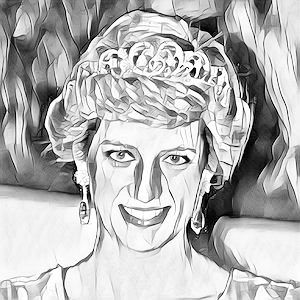 The story of Princess Diana


Princess Diana was seen as the people’s princess, we will go over the path that she took that led her to this reputation amongst the public.

In the modern-day Princess Diana (Princess of Wales) is known as the royal who broke all sorts of boundaries previously unknown to royal family members. She was seen as a woman who was a revolutionary in many ways in regard to royal family protocol at the time, despite all the good she did in her life, Diana would go on to tragically pass away in a fatal car crash. In this piece we will go over what she did during her lifetime, her struggles and accomplishments, as well as her legacy that she has left behind after her tragic death.

Early on in her life, Diana's family struggled a lot with their legacy, feeling very stressed and panicked at the lack of a son to continue their family name. They were close with members of the royal family also. This stress would eventually go on to lead to her parent's divorce, meaning Diana had that to deal with at such an early stage in her life prior to her time as a royal.

Diana's biggest combat was most probably that of her fight with bulimia whilst an active member of the royal family. She struggled with bulimia mainly due to the hollowness of her marriage to Prince Charles, rather than solely ‘insecurities' like the royals had assumed at the time. She struggled immensely with her marriage to Charles, with him supposedly having consistent affairs with his past lover, this being especially highlighted with their re-marriage upon Diana's passing. The emptiness of Diana's marriage was something that left her with great feelings of worthlessness and with remarks that Charles had made to her in reference to her ‘chubby' figure a week after their engagement, it had only hammered home the low self-image that Diana had had of herself at the time.

On many occasions, Diana had attempted suicide throughout her life. Despite these attempts not being serious attempts, but rather calls for help from the outside, they were still concerning. One example of Diana's struggles with life was when she had thrown herself into a glass cabinet, highlighting her battle with mental health at a time where she was crying out for help from somebody.

She also helped ease the stigmas surrounding HIV-positive people at the time, with many fearing even interacting with those who had contracted the dreadful disease. She broke these boundaries by embracing a person known to have the disease.

She also would go on to pursue and support a campaign set on banning the use of landmines in combat. This campaign aimed to ban landmines due to their common nature to cause post-combat deaths, with many of the injured from these remaining landmines being children. She set out on a campaign to an abandoned minefield in Angola, which now bears fruit due to the Ottawa treaty, which has since banned the use of landmines in combat, which she no-doubt played her role in doing.

She would die young tragically, but that did not stop her passing on her unique mindset to her sons William and Harry. Harry especially took the torch in continuing the legacy his mother had left behind in terms of breaking royal protocol and boundaries to do what is right. Harry's now-wife Meghan Markle has had comparisons drawn to Diana in many ways for the way she conducted herself as a royal despite their very public step-back from royal duties.

Princess Diana had found herself in a privileged position in life, and despite battling her own demons, was self-aware enough to realize this. Her acts of selflessness and kindness to those worse off than her in life in homeless shelters and hospitals for example, even when the media was not watching was something that we can all admire to treat people how we would want to be treated regardless of our current situation, their background or the background we ourselves are from.

2. Break barriers regardless of what others will think

Being a royal, Diana had many protocols that she was expected to adhere to during her time as part of the royal family, however she ignored many of them. She would break the barriers as previously mentioned when it came to the stigma surrounding HIV-positive infected people by embracing them, as well as breaking barriers in terms of supporting the end of political campaign such as pursuing the banning of landmines in warfare. She was a woman who was not conservative enough to hide her thoughts and was always truthful when speaking her mind regarding any topic, despite the grip that being a royal family member can often have around ones next. She was a revolutionary figure whose life was tragically cut short so early on in her lifetime.

Princess Diana will go down in history as the royal family member who broke the boundaries between the family and the public, as well as breaking barriers in terms of moving outside of what was expected from a royal. She was the relatable princess, the people's princess, and a woman whose legacy continues to inspire many all over the world and a woman whose work continues to live on through her sons in the modern-day despite her tragic early death in a fatal car crash.