Rosa Parks – The Bus Seat That Ignited the Flame 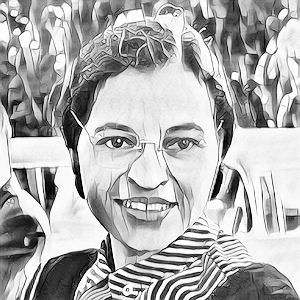 The story of Rosa Parks


Rosa Parks was an activist who stood up for her own rights and her people’s rights as humans and put it all on the line for what she believed in.

Rosa Parks was the classy woman who shook the world of racists when she refused to give up her seat to a white person on a bus as a result of segregation laws in the 1950s. This made her the first black women to argue in the name of her rights as a human to hand up her seat for a white person on a segregated bus. She would go on to become an American figurehead for activism for racism and the black civil rights movement, being labeled as 'the First Lady of the civil rights movement'.

Rosa had grown up in the South of America, notorious for its racist background. This was an area where strict racial segregation took place around every corner. Blacks, as well as being segregated from whites, also were supplied with lesser and worse access to resources than whites, with them having worse experiences even in activities that were supposed to be enjoyed such as restaurants and beaches. If anybody of color at the time were to dare to oppose these laws imposed by Jim Crow, then there would be a level of severe danger imposed upon them. This did not stop Rosa, however.

After the bus incident, Rosa struggled financially due to her 'criminal' record when 'breaking the law' in refusing to give up her seat for a white person, which resulted in an arrest. She lost her job and was unable to receive a new one due to her 'criminal' record as previously stated and the reputation she had acquired as a campaigner for black civil rights. This whole reputation that had been formulated around her would eventually force her out of her hometown of Alabama, unfortunately.

However, despite the difficulties she faced following her act of courage, the eventual deserved praise began to show down the line. She would go on to become a figurehead for the black civil rights movement, as well as earning many awards along the way as a result of her activism. These awards included many of the following such as the Martin Luther King Jr. Award which she was given by the NAACP in 1980, as well as being inducted into the Michigan Women's Hall of Fame in the same year. She would have the honor of being a member of the welcoming party who welcomed Nelson Mandela back from prison upon his release in 1990. She was awarded the highest civil honor of her country with the Presidential Medal of Freedom from Bill Clinton in 1996. Lastly, she had a statue of herself made and placed in the National Statuary Hall of Washington D.C which was demanded and ordered by the then-President George Bush.

Overall, she was a woman who did all she could to show immense courage at a very challenging time in her life and many black people's lives to show them that there was hope for equal rights in this extremely oppressive and racist world.

1. Stand up for Yourself.

Rosa Parks had become fed up of the world she was in and the ridiculous laws and racism that was running rampant throughout it, as shown on that famous day when she refused to give up her seat to a white person on the bus. She would have known the repercussions of her actions yet did so anyways to follow what was right and set a precedent of what in modern times is seen as clearly wrong. She was a woman who stood up for not just herself, but all the black people who had been wrongly shamed and oppressed by a racist world.

2. Fight Your Bigoted Oppressors with Grace.

Despite a violent reaction being more than accepted given the circumstances, Rosa Parks never resorted to that. She always handled herself with dignity and grace, despite the fact that the same could not be said for those who were against her. She could have easily given into the rage of the ridiculousness of the situation she and her people had found themselves in life at the hands of the racist white people of the world, yet she didn't. She continued to fight the race war with a peaceful message that forgiveness was an option, as long as the equality was the tradeoff that blacks rightfully received in return.

Rosa Parks was a woman with a lot to lose, with a job and financial dependency on the line when standing up for herself and her people on that day on the bus. Despite this, she put it all on the line in the name of what she felt was the right and just act to carry out in the name of equality for blacks and other oppressed minorities at the time. She was an activism figurehead and still is seen as one of the most influential women of her time and of the last 100 years despite her passing. She earned countless awards for her bravery and courage throughout her life as an activist and was definitely an influencer on racial equality, as despite it still being a clear long way away, she helped it push ever closer to where the end goal is for the black people of today and other racial and ethnic minorities of this very judgmental and racially oppressive world.