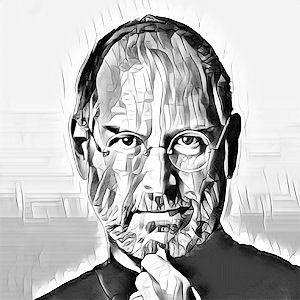 The story of Steve Jobs


Learn how Steve Jobs overcame childhood trauma and other obstacles to become an innovator in the technology and animation world.

Steve Jobs was a business magnate and a widely successful innovator in his time. He is widely known as the man who achieved so much in his lifetime and pioneered the computer, personal device and phone industry as the CEO and co-founder of the first company to be worth over $1 trillion with Apple. But what obstacles did Steve Jobs have to overcome to get that point in his life where he became known as an icon of human progress? In this piece, we will be going over the obstacles that he faced on his path to success and how he overcame them, as well as what people and society can learn from the path he walked.

Steve was set to struggle to succeed from his birth. He was born to a young, unwed graduate student who had decided that the best outcome for her child was to put him up for adoption. It was at this time that a couple who had offered to take him upon his birth was turned down by Steve’s biological mother due to the fact that she wanted Steve to be brought up by a family who had graduated from college, which this couple had not done. They eventually managed to adopt Steve as a result of promising that he would attend college down the line no matter what. And that he did.

However, Steve would hit the first roadblock of his adult-life at this point. He had decided to drop out of college as he had no idea what he wanted to do with his life as well as having no idea how college was going to help him figure this path out. This was the time when Steve just let whatever will be, be and trusted that life would turn out alright. He slept on the floor of friend’s rooms and he would return Coke bottles for the 5cent deposits in order to survive and buy food. It was during this time that Steve would attend drop-in classes in calligraphy, which he thought would have no bearing in his life, but he attended nonetheless out of interest. Little did he know at the time that this would be the pre-set for the customizable fonts and spacing for the iconic Macintosh computer.

It was not long after that Steve started a company in his garage with a friend, where eventually, ten years down the line, it would be worth over $2billion. However, it was during this time that he was fired by the company that he had founded. This was a shock for Steve, but he states that it was the one decision that shaped the rest of his life.

In 2004, the beginning of a series of health problems began as he was diagnosed with a supposedly incurable cancer that would leave him with an expected three-six months left to live. He was told by the doctor to “go home and get your things in order”, which Steve states is ‘doctor code’ for “prepare to die”. This event was followed by a liver transplant that he needed in 2009 and ultimately in 2011 he passed away through a respiratory arrest through a reoccurrence of his pancreatic cancer with his family around him.

How Did Steve Jobs Overcome His Obstacles?

Steve always acknowledged that at every point in his life, he never had the answers. He states that “you cannot connect the dots looking forward, you can only connect them looking backward”. As previously stated, Steve realized over time that his firing from Apple was the greatest thing that ever happened to him. He felt that the heaviness of his success was replaced by the lightness of being able to begin again.

It was at this ‘reset-era’ that Steve started two new companies and met the love of his life. He began a company named NeXT and Pixar, he describes this time period as the “most creative period of his life”. Pixar would go on to become the most successful animation studio on the planet and NeXT would eventually be bought by Apple, cementing Steve’s circle of life as he returned to Apple. This turn of events highlights Steve’s belief that things would just work out no matter the circumstances if he kept his interest high and passion flowing. Alongside his return to Apple, Steve had made a beautiful family, which is the ultimate goal of life.

Steve would show his ultimate passion for success and pride in his work as despite his resignation as Apple CEO in 2011, he would continue to work for the entire six weeks leading up to the day before his death. Steve lived, breathed and experienced what it was to be a man who prided himself on his projects and work, and no matter what, put his all into everything he did in both sickness and in health.

1. Always Bounce Back from Life’s Hardships

He believed that when life has decided to throw a curved ball at you, that it is vital to not let it deter you from your goal. Shown with his health problems and continuation to work, as well as his firing from Apple to only go on and create one of the most successful animation studios ever.

2. Discover What You Love to Feed Your Path to Success

Steve was also convinced that the only thing that kept him going despite his setbacks was that he loved what he did, and he felt that for everybody, it is vital to find what you love in life in order to keep bouncing back from the setbacks you will face.

3. Acknowledge Your Mortality and Realize You Have Nothing to Lose

The acknowledgment of one’s mortality and inevitable death is of utmost importance and was always something that Steve would think of when needed guidance on important life choices. He states that “Remembering that you are going to die is the best way to avoid the trap of thinking you have something to lose”. Always live life in the moment and follow your heart and intuition to guide you to your life’s purpose, as they will always know the answer before you do.

4. Do Not Waste Your Life Being Concerned with Other People’s Opinions

Steve states that “your time is limited, so do not waste it living someone else’s life, don’t be trapped with dogma, which is living with the knowing of other people’s opinions”. Steve followed his own heart and head with every vital decision he made on his path to success, despite the obvious public and private judgments of others. We must not let others waste our lives for us by letting their thoughts and opinions drag us into the mud. We must live our own life for ourselves.

In conclusion, Steve Jobs was a man who shaped a large majority of the technological world we live in today. As well as this, he was a man who had to overcome many setbacks to get to the level of success he had achieved before his death. His words of wisdom are ones that everyone should consider when wanting to discover what purpose their life has in this world.