Steven Hawking – Disability Does not Define the Mind 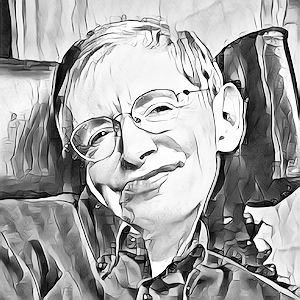 The story of Steven Hawking


Steven Hawking was a man with a difficult hand dealt to him, yet he made the most of it. Discover the obstacles he had to overcome to achieve his success.

Steven Hawking began his career in Oxford University at 17, and went on to become a genius and the creator of the theory of cosmology and the discoverer of "Hawking' Radiation", but how did he get to the point where he was the leading figure of science and brains for his generation and what obstacles did he face along the way? In this short piece, we will go over the challenges Steven faced throughout his life to get to the level of success he reached.

Steven's first challenge in life was one of his family's concern as his father's farm went bankrupt early on in Steven's life. His family was unable to afford without scholarships to receive the education they felt his mind deserved. However, Steven saw the positives in this and saw staying in his current school with his closest friends playing board games and such as a greater benefit to him anyways on his path to attending Oxford University at 17.

Steven Hawking had a lonely life early-on in Oxford, but as his time went on, he began to settle in and slack on his studies. Upon his graduation, Steven and his family were shocked to discover that he had been diagnosed with Motor Neuron's Disease at the age of 21 and was given two to five years to live on average. This sent Steven into a deep depression that he felt he would never escape from, with all his work and studies feeling pointless due to his inevitable death feeling just around the corner at every turn.

As his disease worsened, and he needed more care, Steven had his first major health scare in 1985. He had contracted pneumonia, which led the doctors to have little other choices than to put him in a drug-induced coma. It was his wife who was left with the decision whether or not to end or continue the life support. However, instead she made the decision to send Steven to Cambridge to have a tracheotomy surgery. This was the surgery that completely cut off Steven's ability to speak whatsoever.

Steven would continue to live with Motor Neuron's Disease for over 50 years despite the short life span that many with this disease are given and would go on to further his career exponentially.

Despite being diagnosed with this deadly and terrifying disease and being given two years to live, Steven Hawking went on to have his written thesis approved by his University and alongside this obtained his PhD in Applied Mathematics and Theoretical Physics in 1966. He had also written an essay titled 'Singularities and the Geometry of Space-Time' which went on to win one of the most prestigious awards, the Adams Prize.

Hawking's successes were only beginning there; however, as in 1974, he made the then controversial discovery that black holes emit radiation. This would eventually be accepted as a scientific breakthrough rather than controversial and the radiation that was discovered would be named after Hawking as 'Hawking Radiation'.

Steven Hawking made a full recovery from his tracheotomy too, and not too long after sold over 10million copies of his book 'A Brief History of Time'. This was a record-breaking best-seller as it appeared on the Sunday Times Best-Sellers list for a whopping 237 weeks in total. He defied the odds so much and stated that 'this has not prevented me from leading a full and active life', in reference to the impact he was allowing or not allowing his disease to have on his progress as a person. He also would go on to co-author children's books alongside his daughter.

Hawking would be a figurehead for the warnings of public figures on the catastrophe that awaits humanity with climate change unless drastic changes are made to our reliance and over-indulgence industry-wise. Despite many of these recommended changes being ignored still to this day, Hawking can never say he did not warn us when it comes to the ever-lasting impacts climate change will have on our planet.

Lastly, Hawking was a figurehead for the possibilities at hand for those with disabilities. For many, there is an ignorance that people with severe disabilities have a lower ceiling than those without disabilities, and Steven proved that theory completely wrong by achieving what seemed like the impossible with his illness. Hawking has inspired both non-disabled and disabled people alike to realize that the ceiling for people with life-altering disabilities is as high as they want it to be.

1. Do Not Panic in the Face of Doom

In many cases, people let the fear of death or bad situations define and ruin large proportions of their life and hinder the opportunities they could be experiencing in life, but Steven Hawking shows that no matter what news we get or what scenario we find ourselves in, our potential is still there to reach and that we should remain calm and collected despite the fear so that we may still achieve our goals.

2. Not to Let our Obstacles Define

Many people, especially disabled people have a fear of their disability and often fear the judgment from others that their disability will define who they are. Steven could have easily fallen into the same mindset, however, he chose to rise up from the hand he had been dealt and let him define a generation rather than letting his illness define what him and his life would be. This is an ideology that we could all look up to.

3. Positive Thinking is the Key

To overcome his obstacles, positive thinking was the key for Hawking. He always tried to be on top of the negative aura that would follow anybody around in a situation like his, ready to appreciate and focus on what he does have in life and the opportunities he has had, rather than focusing on the opportunities he has lost due to his illness. He never let his supposedly terminal illness at the time define what his life and career was going to mean, and thus went on to have wildly unimaginable success as a result.

In conclusion, Steven Hawking was a man who was dealt a terrifying hand, and yet somehow defied the odds and made the most of his situation to the extreme. He broke barriers for disability and climate change and was a best-selling author as well as a renowned scientist who had made groundbreaking discoveries. This attitude and mindset were something we could all learn from Steven Hawking.