Tony Robbins – Your Past Does Not Define You 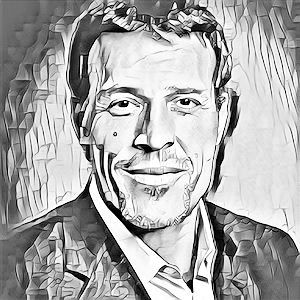 The story of Tony Robbins


Tony Robbins grew up in a torturous household, despite this, he overcome the odds to become a successful business man who has helped millions of lives.

Tony Robbins (Anthony Jay Robbins) as a man is a walking inspiration. He came from an extremely abusive household in his childhood, with a mother who was chronically addicted to drugs and alcohol and would often abuse Tony and his siblings mentally, verbally and physically until one day Tony abandoned it all and sought to tell his story. He eventually would become a world-renowned public speaker and life coach, having investments in over 30 companies and being known for his works on books and charitable organizations that have provided millions without food with meals.

As stated previously, Tony had grown up in a house in turmoil. His mother was dangerously addicted to both drugs and alcohol and would often turn to Tony and his siblings to relieve her hatred upon them. There is stories from Tony's childhood where he mentions a time where his mother had poured a bottle of liquid soap into his mouth and forced him to swallow it. Despite the torture that Tony had to endure mentally and physically, he always looked out for his siblings as the eldest of the lot. His abusive mother would remarry four times during Tony's childhood, further meaning that him and his siblings were left to fend for themselves, with Tony assuming that role of responsibility to ensure that he could relieve his siblings of the life they too had to endure as much as he possibly could.

Eventually, the time would come for Tony to leave home following an incident where his own mother had chased after him with a knife, forcing him out of the home in fear for his own life. This was the straw that broke the camel's back and Tony had never returned home from that day onwards, however, he would continue to support his siblings who remained trapped in the hell that was his mother's home despite his low income jobs and living day by day.

Tony had much to be proud of even at this stage of his life with the resolve he had shown to endure the years of abuse his mother had thrown at him, as well as the responsibility and courage to stand up for his siblings and support them in their time of need.

However, greater things were on the horizon for Tony when he decided to take a chance in contacting famous motivational speaker Jim Rohn. Jim would become inspired by Tony's story and lead him to a life of telling his story and helping others. Tony would go on to travel around his nation, spreading the consistent message that your past does not lead to your future.

His first book 'Unlimited Power' exploded him onto the scene, with it leading him to where he is now in life, having investments in over 30 companies, as well as being worth in excess of 500million, along with him following his initial morals of helping those in need that he had taken from his childhood with his charity now having fed over 50million people across the globe. Tony's story has certainly changed his life, and in almost every way for the better.

What lessons can we learn from Tony Robbin's Life?

1. Your Past Will Never Define Your Future

One message that anybody can take away from Tony's life story is that of a message that Tony preaches himself, that being that your past will never define who you can become in your future. Tony's story is a perfect example of someone overcoming the most immense of traumas in life to become someone who excelled in every area he touched. He has achieved the unimaginable and is now in a position where he not only has helped himself, but continues to help millions of others around the world. He did not allow his past to define his future, and neither should you. That is the lesson.

2. Assume Responsibility for Those in Need

Despite Tony undoubtedly struggling with his own demons throughout his childhood and most likely continuing into his adulthood, he always sought to help those in need, starting with his siblings. Despite Tony having to endure the bulk of the torture at home, he still always put his younger siblings at the top of his priorities when seeking to make sure that they get out of the abusive household that they had unfortunately grown up in, continuing to do so even when he was living day to day on little money away from them. His responsibility and tack for assisting those in need continued into his current life, with his charitable work and assisting of those who come from similar or not so similar backgrounds to himself showing that Tony has achieved his life goal of assuming responsibility for others in their time of need.

In conclusion, Tony's life is one that no child should have to go through, however, unfortunately millions do. He shows a light to these people that there is light at the end of the tunnel and that anything is possible so long as you manage to find a way to escape the shackles placed on you by the issues you are facing, and to face the demons in your life. His story is one of inspiration and passion and his life is one that we could all learn from in some way or another.