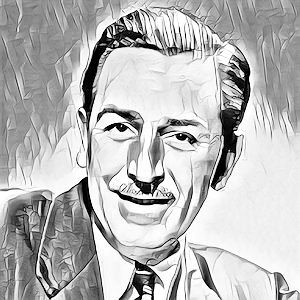 The story of Walt Disney


Walt Disney is known as an animation icon and a man who innovated animation in general. How he achieved his level of stardom in the world of animation?

Walt Disney was the co-founder of one of the most iconic logos, brands and animation studios in history. As well as being incredibly successful as a result, earning the most academy awards by an individual ever. This short piece will go over the road that lead to Walt's legendary success and what he achieved during his life span.

Walt's father was a heavily abusive figure to both Walt and his family, all whilst the financial pressures of trying to survive were a constant worry and burden on Walt and his family. Eventually, Walt would grow sick of his father's abuse and would leave to join the war effort of World War I, lying about his age in the process. Years down the line, Walt would miss his father's funeral, prioritizing a business trip over it. Signifying the lack of care and forgiveness he had for his father's actions throughout his life.

Disney's first animations studio was a failure also. He had formed a company named 'Laugh-O-Gram Studios', only for it to be forced into bankruptcy shutdown at the turn of the 1920s. This was when Disney had set out on the road to travel to Los Angeles to attempt to start over, but with little money to his name on his travels, this would prove difficult. This was highlighted by his attempts into acting, where he would fail also. However, it was in this same decade that his first breakthrough in animation had begun, when he formed the concept for Micky Mouse, however, it would take over three hundred rejections of funding for his concept before someone would agree to the idea of funding his concept for the now legendary character.

One of his final major struggles was during the second World War, when he had his animators go on strike and refuse to work. This led to Disney's debts flying up, contributed to by the devastation that the World War was having on the world.

Disney's successes however are much broader than his failures. He would co-found Walt Disney Productions, as well as create arguably the most iconic character ever made in Mickey Mouse in 1928, and furthermore, he would go on to adapt his concepts of Mickey Mouse and other animation and studio-based efforts into television after the second World War in an attempt to recover from the massive debts he had accumulated, which was a decision that not only diversified the company, but would lead to it's true nature of exploding into not just a successful animation studio, but an icon for entertainment.

His most ambitious and successful venture was still to come, however. In 1955 Walt Disney would open Disneyland. This concept of a magical land that people could escape to for a while was something that exploded in popularity and massively contributed to the iconic image of Disney and the perception that it received from the public eye. Disneyland would go on to become by far the most popular and iconic theme park in history, and since its opening, it has accumulated over 700 million visitors, roughly 10% of the world's population currently.

In terms of individual successes, he had many. He is still to this day the record holder for the individual with the most academy awards received, earning 22 Oscars from just under 60 nominations, a phenomenal record and turnaround for anybody, let alone an animator. As well as this, he would have all his accomplishments and successes, as well as his innovations to the world of animation, approved and acknowledged by the highest power of his nation, when he received the Presidential Award of Freedom, as well as the Congressional Medal of Honor later in his life.

Walt Disney found himself in a dire situation at the start of his life, being trapped in an abusive household that was barely struggling to get by. However, he decided that his independence was something he should seek out rather than sitting by and letting the troubles of his family drag him down. He picked up and left home to search out for his own route in life, realizing that the only way his bad hand was going to change was to change it for himself, and that he did. This shows that regardless of the situation you may find yourself in, always look for the light at the end of the tunnel and try and see that there will be a way out somehow.

2. Learn to Adapt and Overcome

Disney had many struggles, whilst trying to adapt his life to see what works for him, he would encounter bankruptcy at animation level, and instant failure at acting level, as well as over 300 rejections on his now iconic character Mickey Mouse before it was given a chance. This was something that Disney had to accept and find a way to overcome. As well as in his later ventures with Disney, he would have to adapt the company many times, moving from film, to television and then stretching out to the unthinkable, a world or land based off the entire Disney franchise, which he would achieve and use to blow his company into successes that he never would have dreamed of in a million years at the beginning of his independent life as an adult.

Walt Disney was a man of a struggling background, born into an abusive family with poverty issues, only for him to go on and have similar levels of money-struggles and failures in his own independent life many times before he had finally found a way to succeed with his dream and passion. His story is one of incredible inspiration, to show how a man can create the most iconic brand and characters the world has ever seen, despite coming from such a troubled childhood.